These two genealogists had done a tremendous amount of research on our immigrant ancestor. Theirs was a collaboration across the ocean: Rosalie lived in England and Linda in the U. S. Together they were able to put together a great early history of the family. Sometime later, additional research resulted in an article in The American Genealogist on the mother of Bygod Eggleston. Their research and documentation cleared up some errors which had been around for a long time.

Rosalie passed away not long after I became aware of these two cousins and their work. I was able to make contact with Linda and began corresponding with her. In 2001, in response to my inquiries about Donald Eggleston’s database on the Joseph Eggleston family, which was online but not in the most usable form, Linda sent me her paper copy of his compilation. With it was this handwritten note: 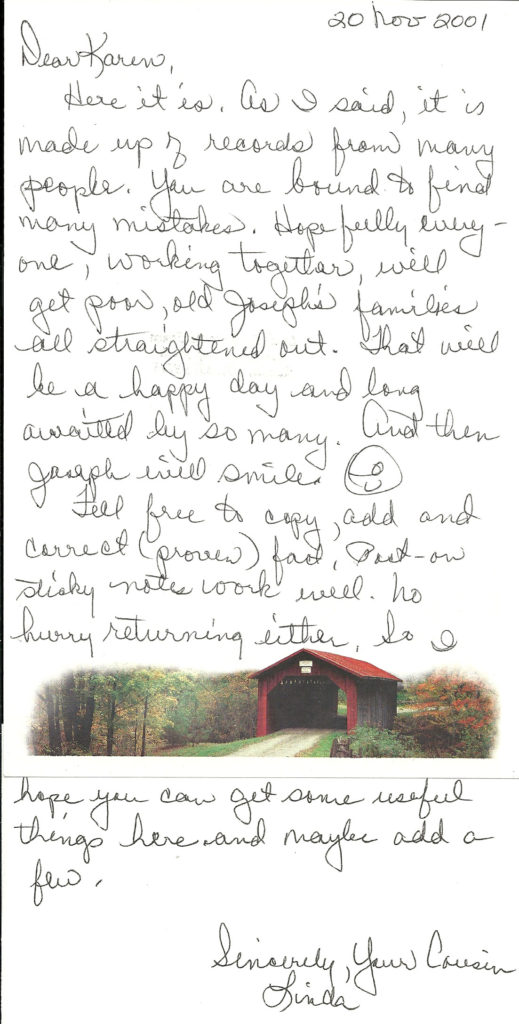 Linda also sent me other information, notes and correspondence, including copies of all of the Eggleston entries in the Barbour Collection of Connecticut Vital Records. I had made contact with several other distant cousins who also generously sent me information they had collected, but somehow this felt a little different. It was a vague feeling that a torch was being passed to me.

Passing of the Torch – A New Family Archivist

I never did return Linda’s book. She said not to worry about it. Then not many months later, in September 2002 I received an unexpected email:

Now I did feel like a torch had been passed and I had become an official family historian of at least the Joseph Eggleston family (The first one, the son of Bygod). I fully realize that there are other experienced genealogists researching this line and don’t want to discount their contributions. I am not the only Eggleston family historian, but I did sense that I had been given a special trust. This trust encouraged me to continue my research, which resulted in the most comprehensive history of this probably least documented and most messed up line of Bygod Eggleston’s family.

The information in Donald’s book, along with other records and information was available online. It was not so much that I was given something no one else had, but the feeling was that I was being given a position of responsibility – to become the family Archivist.

Family Archivists in my Immediate Family

A similar thing happened in my more immediate family. My great grandfather Orson Hyde Eggleston was born in 1841, just months after his parents were baptized members of the Church of Jesus Christ of Latter-day Saints. As a member of the Church, Orson took seriously the charge to search out records of his “kindred dead”. He also sought records of his living relatives while serving a Mission in Michigan, where aunts, uncles and cousins lived. He corresponded with genealogists and historians of his time to try to extend the family line back further. In 1914 he went to the Logan L. D. S. Temple and performed vicarious baptisms for many deceased relatives. Orson died in 1917 and apparently his records were passed on to his son Theron, my grandfather’s youngest brother.

Theron lived in Salt Lake City near the Utah Genealogical Society and he and his wife spent a great deal of time pouring over records there searching for as many deceased relatives as they could find. During my research journey, I made contact with Theron’s daughter Ruth and visited her home. She apparently had become the keeper of her parents records after their deaths. In her basement were numerous boxes of records, including their many hand-written notes. This was an archive, which she had dutifully stored for years. She let me take a couple of boxes full to make copies. She also had possession of Orson’s family Bible and a book in which Orson’s father Samuel had written some journal entries. 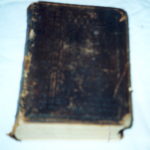 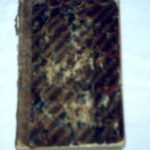 I don’t know how many of these records Ruth had actually searched through and read. I also did not get the impression that she had done research herself. But she had felt the trust of preserving these records. She has since passed away and I don’t know who received all of these things. I don’t know if she gave someone the charge to care for them while she was still living, or whether her children were faced with the decision of what to do with them. Possibly some of it has been thrown away or destroyed. I hope not. I still have my copies which I intend to keep and preserve in some manner.

What I do know is that somewhere in my journey of learning about the family, I developed a very real connection with my great grandfather Orson. Somewhat like the feeling I had of the larger Joseph Eggleston family historian position being placed upon me, I felt that Orson was entrusting me with the responsibility to not only gather, keep, and preserve records as he did, but the responsibility to continue the search to add to the family history.

To be an effective family archivist, it is most important to understand the importance of these records and their value to the family. This is not something that can necessarily be taught, or instilled through guilt or a sense of duty. It is like a calling – some of us just get it. Perhaps our deceased ancestors watch us and somehow choose some to carry on this trust. I have identified five main responsibilities of a family archivist.

Responsibilities of a Family Archivist:

1. Safeguard and care for records and heirlooms properly so they will last and be available for future generations. This may be a challenge without having personal possession of everything, especially objects. Technology now makes it possible to archive digital copies of documents, stories, photographs and even photographs of objects. Those with original records or objects would do well to learn something about agents of deterioration and how to best preserve these fragile things. This also requires some organizational skills to keep track of everything, including records and objects that may not be in our possession.

2. Search through, study, and learn from the records. Historians become very familiar with not only the records, but also come to know our ancestors through these records and the objects they left behind. We learn about the places they lived and events of their time. We begin to see patterns and connections.

3. Share information and stories so current generations can come to know our ancestors, learn from their experiences, and have a sense of our heritage. A family archive is not a treasure to be hoarded. Heirlooms are just old stuff without the stories that accompany them. Locking up records may preserve them, but for what purpose? The real value is in their influence on family members. There are a variety of ways that information, stories and photographs can be shared. Technology has opened up new, creative and exciting ways to share. The important thing is that we try to share family history with all the family in whatever ways we can.

4. Add things of value to the archive. Most people who realize that they have been given this trust, feel a personal responsibility to search for and find something to pass on. We have a drive to find answers to questions, to solve the mysteries, find lost family members, and extend the family tree. This drive generally becomes an obsession. This trust to add to the archive also includes documenting the current generation and recording our own stories.

5. Pass on the sacred charge. It would be great if all of us knew when we would be leaving this life so we could have everything in order and have time to orient the next archivist whom we have carefully selected. Too often though, a family historian passes away leaving family members to figure out what is what and where it all is, not to mention what to do with it. Often it is by default that someone now becomes the keeper of the records. A wise archivist accepts some responsibility to pass this torch, possibly watching for a family member who has a similar sense of the importance of this history. Sometimes a generation or two passes with archives sitting dormant waiting for the next archivist to take up the charge.

In all of our responsibilities as family archivists, we have a sense that we play an important part in connecting those who came before with those yet to come, to help all gain a sense of our identity and heritage as part of an eternal family.

7 thoughts on “The Family Archivist”