A life sketch of Joseph Smith Eggleston adapted from one written by his son DeLoss which was included in my book.

Joseph Smith Eggleston was born on the July 5, 1885, in Eden Weber Co. Utah, to Annie Christine Johnson and Orson Hyde Eggleston. There was some question as to the date, maybe because the 4th of July was often celebrated on his birthday. His father Orson’s journal and his death certificate place it on the 5th.

Birth date of Joseph Smith Eggleston in the middle of the right page.

Joseph was the second son of Orson and his third wife Annie Christine Johnson. The first child, David Orson was born June 15, 1883 and died November 3, 1884. Annie’s father, Peter Johnson, was a counselor in the bishopric with Orson. He also was working on the bridge over the Ogden river at the head of Ogden Canyon. He got caught in a storm and came home cold and wet, caught pneumonia and died December 17. 1878. Orson lived in a home they bought from Richard Ballantyne.

Orson H. Eggleston’s home in Eden, where Joseph may have been born

Probably due to the pressure on polygamists Orson moved his family to Star Valley Wyoming. They were some of the first settlers of the town of Afton.

I do not know much about Dad’s childhood in Afton. I guess that it was normal. He did break his arm and had it in a cast for several months. When they took it out of the cast he couldn’t straighten it out so he carried a bucket of rocks around for a while to get it straight. This is why for the rest of his life his shoulders were not square they were low on one side.

In his late teens Joe became interested in the Jackson Hole area. There was no road, only a very rough trail up the Snake River canyon. So the way into Jackson hole was over the Teton Pass where Grandpa and Great Grandpa Wilson and Cheney had built the road. Dad carried the mail over this pass and became acquainted with the residents of the valley. He had many stories about going over the pass in the winter and fighting the snow. I do not know when he moved into the valley. 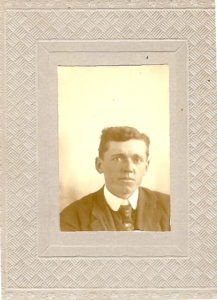 The first land grant on what is called Mormon Row was granted in 1896. Several grants were made in that area. By 1910 Dad and his uncle Jacob Johnson had built a cabin on the land to which he later got a homestead title in 1916. 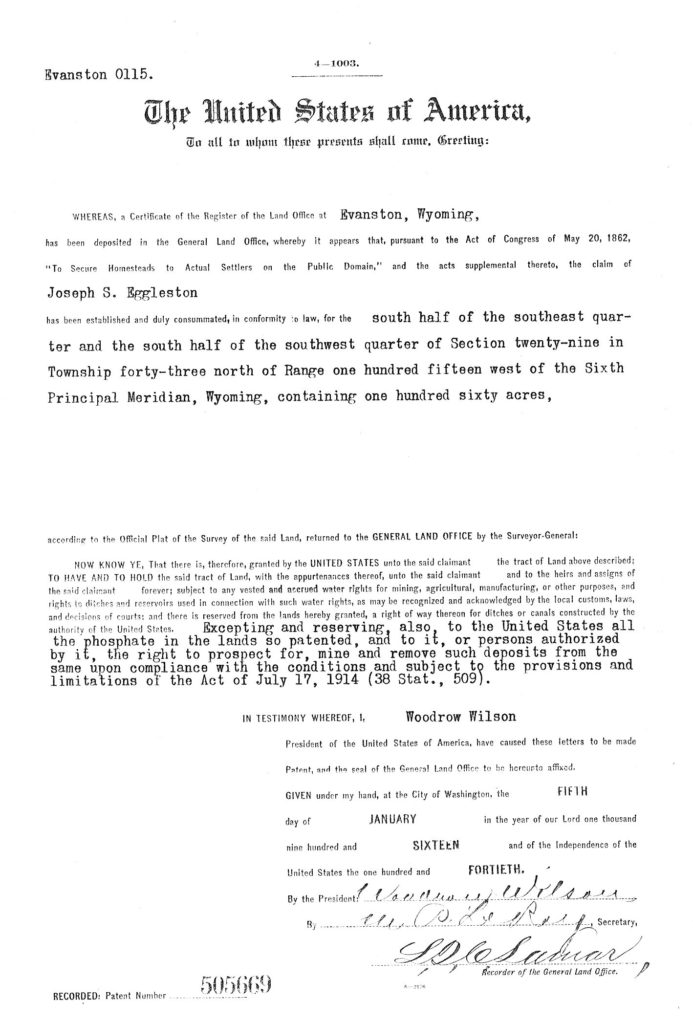 Dad and Jacob dug a 100’ well for their drinking water. On June 13, 1910 Joseph Eggleston and Jacob Johnson appropriated four cubic feet per second of water from Ditch Creek, sufficient to irrigate four 70 acre parcels. They dug a ditch to carry the water to their farm. You can still see the ditch. 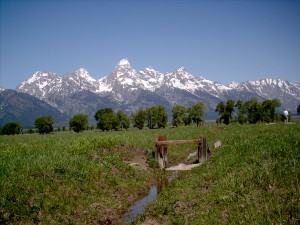 The church was right across the street from their place as was the store. The town was called Grovont which is a corruption of the name of the river Gros Ventre which runs south of Black Tail Butte into the Snake River. This area is now part of Teton National Park.

During this time Dad did many things including feeding the Elk on the reservation just north of Jackson. He told me that he learned that the Moose would not bother you if you looked them in the eye but if you turned your back they would attack you. I don’t know if that is true and I don’t think I will try it. He also helped build roads in the area including the Hoback road. 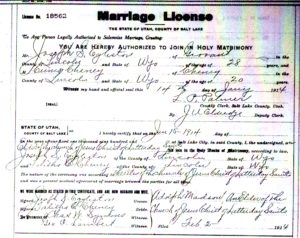 Marriage License for Joseph and Cuma

Dad married Mom, Talitha Cuma Cheney, in the Salt Lake Temple January 15, 1914 and she moved into the home on Mormon Row. They worked in the Church and Mom became Relief Society President. Dad was president of the Sunday School, among other jobs.

While they lived on Mormon Row they had four children, Alice, Wesley, Lola, and Orland. Life in that area was interesting but the winters are rough. The decision was made to move back to Utah and settle in Eden. When Dad left that area he sold the farm to Jacob who later sold it to the Chambers who lived there until it burned down about 1936. It was used briefly as a post office.

In 1919, Dad and Mom made the move from Jackson Hole to Eden. They bought the place in Middle fork where they lived until dad died. This turned out not to be the best move. Dad bought a herd of cows and hay to feed them for the winter. The next spring the bottom fell out of the market and the value of the cattle dropped. Dad always felt that he would have been better off if he had done nothing that winter. It took a long time to get out of that debt. 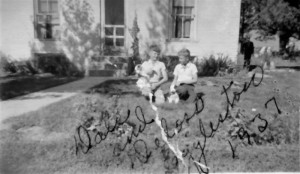 I regret that we don’t have a good picture of the house. This is Dale and DeLoss in front of the house

I have always been amazed at all Dad did. The house he bought was not a big one. It was one story with outside plumbing. He dug basement walls and poured cement for the walls and foundation then diverted the irrigation ditch to wash the dirt out of the basement area then poured the basement floor. He dug a huge septic tank on the side hill bellow the house and dug a 30’ well on the north side of the house. Then he put in a pump and we had running water and an inside toilet. The girls slept upstairs and the boys downstairs.

Four more children were born in Eden: Laura, Melvin, Dale, and DeLoss. Actually, I was born in the Dee Hospital in Ogden. When Dad bought the place light was from a carbide tank in the yard by the granary. Electric power came in so that was not used. I don’t know how he could afford some to the things he bought like a milking machine and a Maxwell sedan car. However, I do not remember the car running. It was in the barn and we used to play in it. Our transportation was horse and wagon or buggy or in the winter a sleigh. 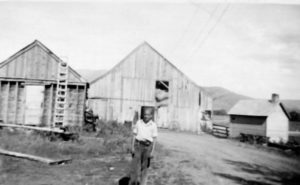 View of the barn and other buildings on the Eden farm

In the middle to late 1930’s Dad became interested in hauling milk for the dairy. By 1938 he had a contract with Weber Central Dairy to pick up the milk in Eden and transfer it to a truck to take it to the Dairy in Ogden, That year he also got the contract for Liberty which included the trip to the Dairy.

This was a daily job, early in the morning you milked the cows, always at least 22 head, then you took off for the milk route. Dad always left first to go to Liberty because it was farther and more milk cans. Then Orland or Melvin and Dale would take the Eden route and meet dad and put all the cans on his truck to take them to the Dairy. By the time I was 16, I went with Dad on the Liberty route while Melvin and Dale took the Eden route. Then, when school was on, we would go to school while Dad went to the Dairy. In the summer someone would go with Dad to the Dairy.

We used the truck from the Eden route to haul hay etc. By 1943 Melvin was in the Marines and Dale was in the Army. I ran the Eden route and Dad ran the Liberty route. Then without a word to me he gave up both routes. I thought I had a job for life but that changed.

Although I never heard him, Dad did play the violin and must have been good at it.

I did not know it but Mother had health problems. I still do not know what they were but in the fall of 1940 she went in for surgery. There were complications and she died November 4, 1940. This was a blow to me. Dad never talked much with me but he had a hard time also.

August 20, 1941 Joe married Stella Cheney Robinson, my mother’s niece. She had four children, LeGrand, Dell, Edith, and Lee. LeGrand was just a few months older than I was. I left home in 1943. 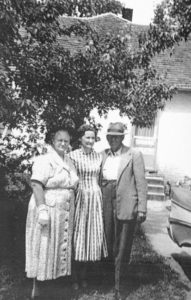 Stella and Joe with Alice

Dad settled down and seemed to have a good life with Stella. They were active in the ward and did well. There was a plot of ground in Eden that was covered with Morning Glory. This weed is hard to get rid of but Dad made a deal with the owner that if he would let him use it he would get rid of the weed. Dad started by plowing it often and then he planted strawberries and raspberries on that ground. Records show that many years he supplied the church welfare with strawberries and squash from that ground.

Back in the 1930’s Dad’s uncle Peter Johnson, who had been running their ranch since his mother had died, became so senile that he could not take care of himself. His brothers and sister had their own lives, so Dad took care of Peter. We also started to take care of the farm. He became so bad that they brought him to live with us. This did not work so he was committed to the Hospital in Provo where he died in 1939. We continued to run the farm until it was sold to Dr. Wikstrom mainly to pay our debt to him. 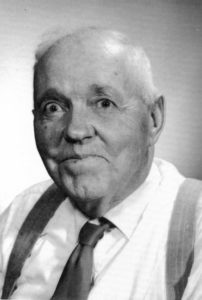 Joe in his later years – as I, Karen, remember him

The last of February or the first of March 1967 there was a big snow storm. Dad had made an appointment to have his truck inspected for the State inspection. There was about 8” of snow on the road but he had an appointment so he started to drive to Huntsville. Just past our pasture he skidded off the road and rolled the truck. It did not do much damage but he was upset. He got it inspected but the worry and accident upset him and he developed bleeding ulcers. It got so bad that they put him in the Hospital at St. Benedicts and started to give him blood. They would not operate on him because he was too old (only 81). He kept getting worse until the blood was just going through him. On March 4, 1967 he passed away. 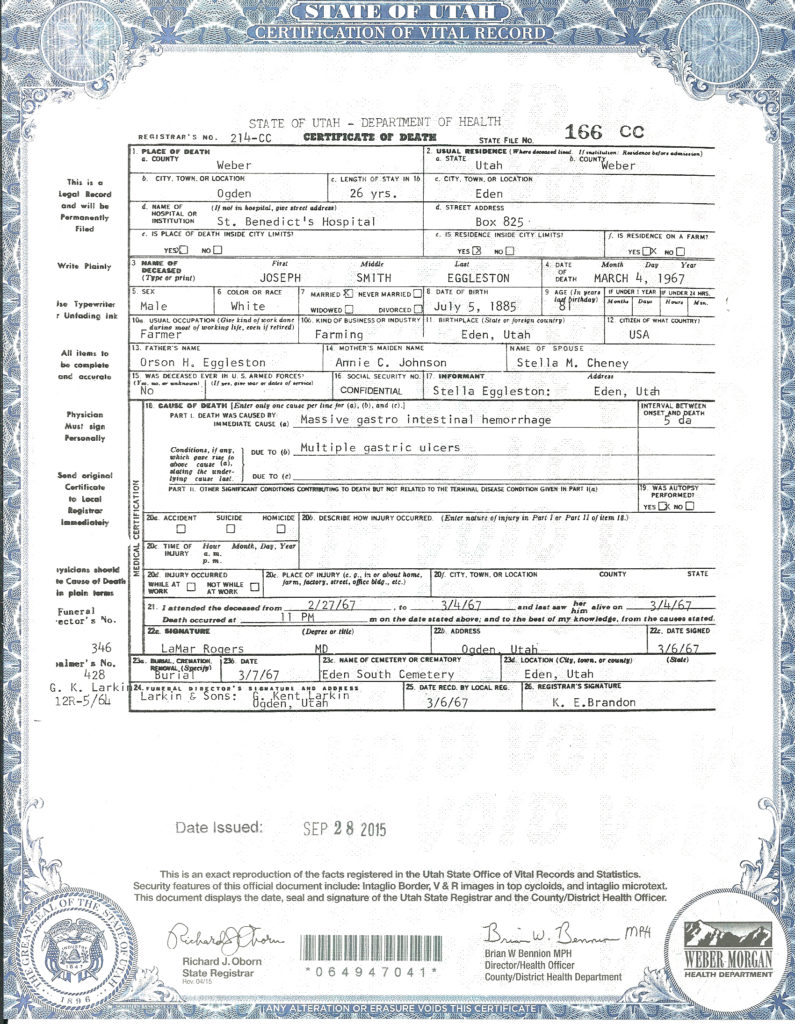 Joseph was buried in the Eden Meadow View Cemetery next to his wife Cuma. Stella was later buried on his other side.

My book is The Joseph Eggleston Family: Seven Generations from Joseph (d.1767) of Stonington, Connecticut to Joseph (1885-1965) of Utah and Wyoming (Including Maternal Lines: Hill, Burgess, Titus, Sammis & Johnson) 2010.