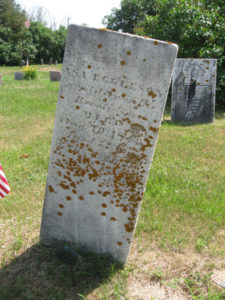 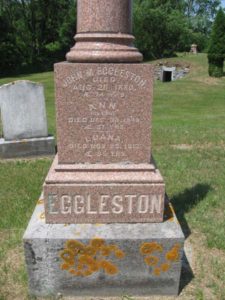 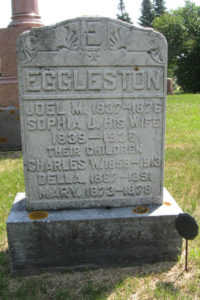 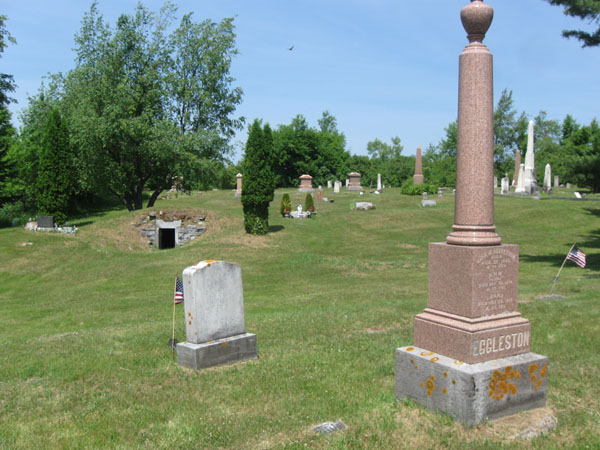 “During the present spring months there has been much mystery and talk about the remains of two people in an open vault in the Dickson Cemetery [this Cemetery was later named Kinne Cemetery] about four miles out of Antwerp on the state highway between Antwerp and Gouverneur villages” says the Watertown Standard. “Scores of people have stopped on the roadside by the Dickson cemetery this year and have viewed the decidedly ghastly spectacle, having been rather doubtful of the tales of the open vault. The vault door is not sealed and all that is necessary is to open the door, walk into the vault and expose the skeletons by raising the coffin lids. But little aside from the skeletons and clothes are visible.

“Many stories have been told and repeated as to the reason of the vault not being sealed, the general idea of the stories being to the effect that the vault is open by design, its occupants having so ordered it previous to their death. One tale in particular has been circulated that 1916 is the fiftieth anniversary of the death of the people in the vault and expose the skeletons by opened all the present year.” (1916 was actually the 20 year anniversary of Harriet’s death. This sentence is copied exactly from the Commercial Advertiser article and does not make sense. It looks like a line of type may have been omitted, or some text scrambled)

Family history, and an informant named Brayton L. Kinne who talked to a reporter, give some background information. Asa Eggleston Jr. (son of Asa, who was son of Isaac) had several children, including John Mitchell Eggleston who was buried in this cemetery along with his two wives and his son Joel (headstones above), and a daughter Harriet Mary Eggleston. Harriet was born March 2, 1814. She married Richmond Howland Jr., who was born September 10, 1803. He was a a Mayflower descendant, tracing his lineage to John Howland. He was also quite wealthy. Harriet and Richmond Howland lived long lives, but never had any children. Richmond died before Harriet, who passed away April 25, 1896. 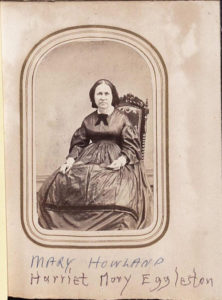 According to this article, Harriet and Richmond had an adopted daughter named Alice Gordon. The probate record for Harriet Howland includes a Schedule A which lists all of her living relatives, mostly nieces and nephews. Harriet outlived not only her husband, but also all of her siblings. Alice Gordon is not included in this list, and no where does it indicate that she was a daughter, adopted or otherwise. Alice Gordon and Harry Green were appointed executors of Harriet’s will, and she was to be given $500 in the original will, which was dated July 13, 1893. A codicil No. 1, dated November 20, 1895, indicated that Alice was to be given furniture and household goods. Harry Green was also given specific items, including furniture he had made. Alice was directed to distribute any household articles not specifically mentioned. A second codicil dated April 11, 1896 gave Alice Gordon Harriet’s house and land in Antwerp.

It appears that in the few years between the writing of the original will and the second codicil, which was actually made days before Harriet’s death, this Alice Gordon must have become much more dear to Harriet – or gained more influence over a wealthy and feeble elderly woman on her deathbed.

Mr. Kinne related that this adopted daughter, Alice, was to see to the closing of the vault. There is nothing in the will mentioning the vault, so this may have been simply a verbal request and understanding. Certainly Alice would have inherited sufficient means to have taken care of that. Mr. Kinne continued: “Miss Gordon was unfortunate in losing the entire estate left her by her adopted parents, through mine speculation. This all happened quickly following the death of the old people and Miss Gordon left these parts, and, so far as is generally known has not since been heard from. She also failed to attend to the sealing of the vault.”

Alice Gordon did sell land in Antwerp, including an almost 4 acre parcel in the village March 23, 1900.  She sold additional land in 1903. One is left to question whether Miss Gordon’s aspirations for wealth were greater than her affection and loyalty to Harriet Howland, or even her sense of decency.

Whatever missing details there may be to this story, it remains rather creepy to imagine people peering at skeletons in open caskets. The newspaper article ends with a statement, which raises a question that today’s technology could possibly provide an answer to – if anyone cared enough to go to the trouble: “Through neglect and the ravages of time but little is left in the way of marks to show the identity of the bodies in the vault.”

7 thoughts on “Cemetery Tour – Kinne Cemetery and the Open Vault”