We started out on Saturday morning August 4, bright and early. Dad always started out “bright and early”. This became quite an adjustment for me. I also quickly learned that when Dad had his sights on a destination, he headed directly toward it. We drove all that day through Wyoming and Nebraska, stopping only for gas. During the drive, I heard lots of stories. Dad had a captive audience and he loved to tell stories. I heard some about his early life that I had not heard before. I realized that this would be a journey of discovery in more ways than one.

We stopped that first night at North Platte about 6:00 p.m. and had dinner at a Village Inn. There was a campground just down the road where we spent the night. The next morning Sunday August 5 we got on the road early, of course, and drove through the rest of Nebraska. 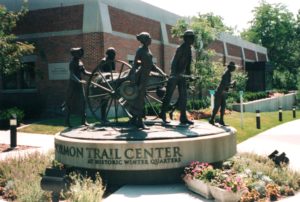 We got to Winter Quarters about noon. It was really hot and humid there. We had a quick look at the Visitor’s Center then ate lunch in the motorhome in the parking lot. Then we went back in to the Visitor’s Center and had a formal tour. It is a very nice Visitor’s Center. There was on display a real stuffed buffalo with a wagon and facades of the Nauvoo and Salt Lake Temples. We saw a very good original film. The Temple was closed and the gate locked because it was Sunday, but we were able to take a few pictures. 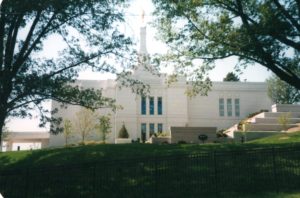 Winter Quarters is a significant and sacred place in Mormon history. In early 1846, the Saints began to leave Nauvoo, Illinois where they had built a thriving city. Many left during the winter and struggled to cross Iowa through all kinds of weather on rough and muddy roads. By the time the first of them reached Council Bluffs, Iowa, it was obvious that it would not be possible for any to go across the plains before the next winter. The Eggleston family did not leave Nauvoo until later in the Spring, so were spared some of the weather related issues and probably made the journey across Iowa more quickly. They caught up with the gathered Saints near Council Bluffs, Iowa.

As winter approached, Church leaders sought a place where they could take refuge until the next spring. They were able to go across the Missouri River to the Nebraska side and formed a settlement there. This hastily assembled settlement of crudely build cabins was home to about 4000 Saints that winter. There was insufficient food so many suffered from malnutrition. Disease easily spread through the community. About 600 people died in Winter Quarters before the Saints moved on. Most of them were buried in the Mormon Pioneer Cemetery there. 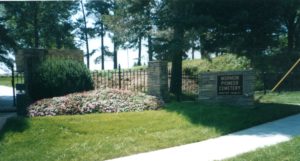 We walked over to the Mormon Pioneer Cemetery, an found the name “Samuel Eggleston and 7 Mos” inscribed on the marker. Samuel was the son of Samuel and Lurania Powers Burgess Eggleston. He had been born January 16, 1847 during that bleak winter. He passed away on August 23rd of that year. By that time, the first of the Saints had started for the Salt Lake Valley, though many remained in Winter Quarters. Later the Winter Quarters settlement was abandoned and those who were not able to start west, crossed back over the river and remained for a time in Council Bluffs. 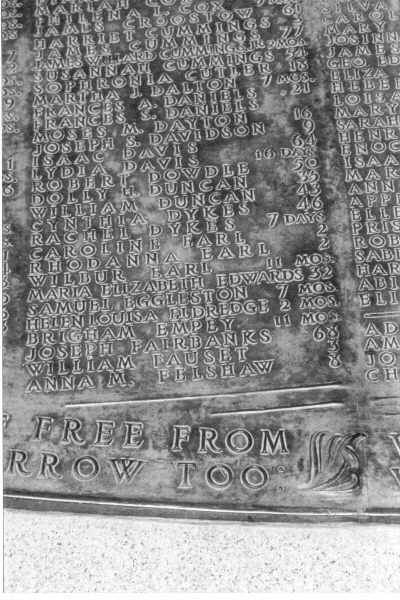 We located the approximate stone under which the baby Samuel would have been buried, using a handy map. There is a statue there which shows a child in a grave with parents standing together above it. In photographs, such as this one, you can’t clearly see the child. It seemed really significant that this was where Samuel and Lurania had buried there baby and this could have been them. 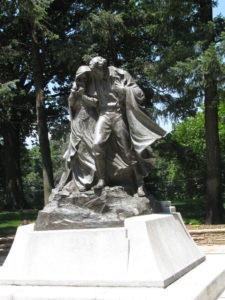 We drove across the Missouri River on the Mormon Bridge and went into Council Bluffs, Iowa. Samuel and Lurania Eggleston lived in Council Bluffs for several years. Samuel had a Boot & Shoe shop there and he owned a good deal of land. Their youngest child Mary Elizabeth was born there on September 22, 1849.  On February 12, 1854 their son Harvey Burgess Eggleston died in Council Bluffs. He was only 19 years old.

In Council Bluffs, Dad and I found a replica of the Kanesville Tabernacle. The original tabernacle was constructed in December 1847 as a place where the Saints could meet for a conference. On December 27, 1847 the First Presidency of the Church of Jesus Christ of Latter-day Saints was reorganized. Brigham Young was sustained as the President of the Church with Heber C. Kimball and Willard Richards as counselors. The Eggleston and Wilson families would have been in the area at that time and may have attended this conference. 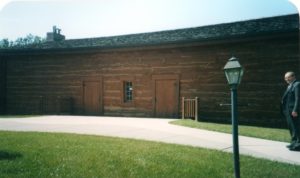 The reconstructed Tabernacle is an impressive building. It was built with the same kind of wood and same techniques as the original. The original was built in about 2 ½ weeks (20 days) out of green cottonwood, by a man named Miller. This new building had mushrooms growing out of the walls. The original building, being made of green wood, did a lot of shrinking, shifting and settling so it was dismantled about two years later. But it had served it’s purpose. The missionary there told of how Brigham Young and the rest of the Twelve were directed to reorganize the first presidency. They had been dragging their feet, but it was time. The building had to be built because it was getting late in the year and the weather would no longer allow outdoor meetings.

There is a Visitor’s Center next to the Kanesville Tabernacle (It was so wonderful that they were all air conditioned-it was so hot). We saw a nice film about the Mormon Battalion and saw lists of Battalion members. We did not have Eggleston ancestors in the Mormon Battalion, but Elijah Wilson’s son Alfred Gideon served in company A.

After seeing the film about the Battalion, I got thinking about my worries and fears about leaving my family for three weeks in a comfortable home with everything they needed. I realized that compared to those men leaving their families for who knew how long with poor shelter and little food, my fears were pretty silly.