What an unexpected surprise to learn that Harvey Burgess, father of Lurania Powers Burgess Eggleston, not only served in the War of 1812, but was injured and left somewhat disabled for the rest of his life.

I recently joined the Daughters of the American Revolution, using Seth Burgess as my Patriot ancestor. His service in the Revolution was documented in the Joseph Eggleston book. In the process of documenting family relationships and birth and death places, the DAR registrar found in the newly digitized War of 1812 Pension Files this new information.

Harvey Burgess, the son of Seth Burgess, was living in Sempronius, New York at the time of the War of 1812. He apparently enlisted with some other men from Sempronius, including his brother-in-law Stephen Carroll. He served from August to October 1812. 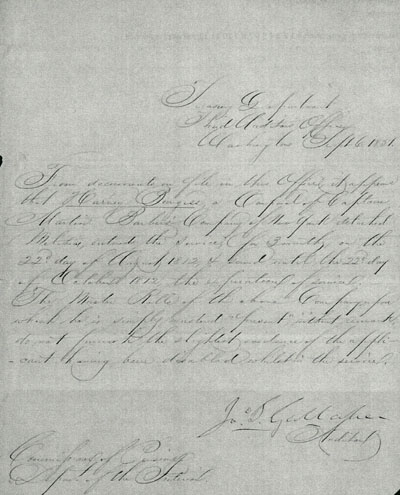 Harvey began the process of applying for a pension for his service in 1851 when he was 72 years old. At that time he appeared before a Justice of the Peace in Macomb County, Michigan where he was then living and made the following deposition: 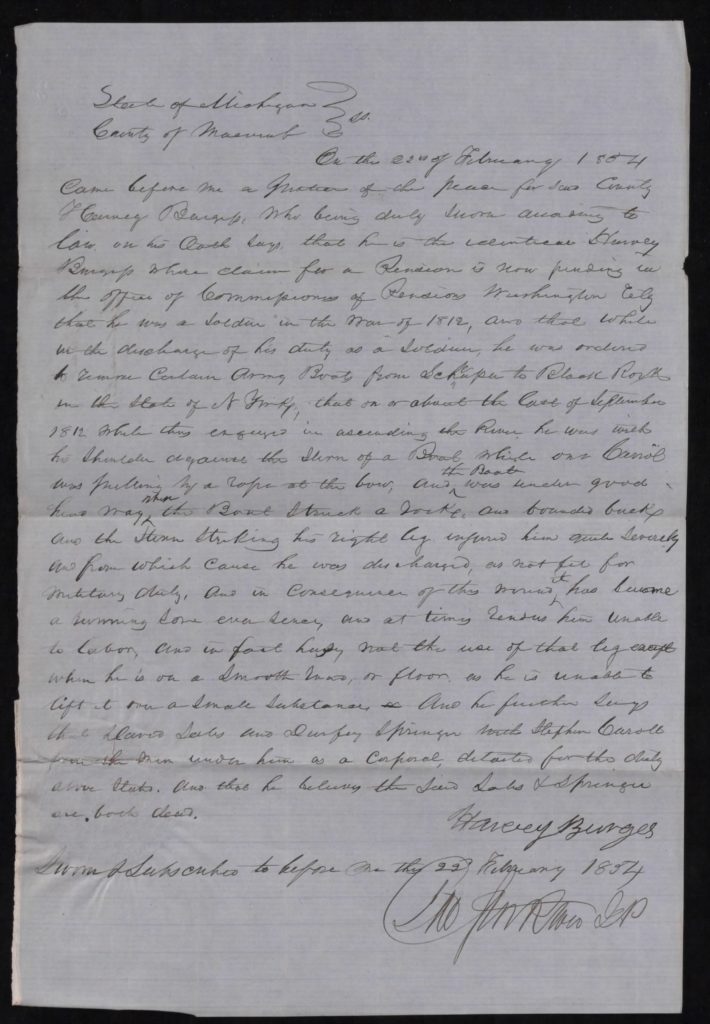 State of Michigan
County of Macomb
On this 21st day of May 1851 personally came before me a Justice of the Peace, for said County, Harvey Burgess aged seventy two, a resident of Shelby in said County, who being duly sworn, declares, that he is the identical Harvey Burgess, who was a soldier in the Company Commanded by Captain Martin Barber in the Regiment of New York Militia Commanded by Col. Henry Bloom in the War with Great Britain, declared by the United States on the 18th day of June 1812, that on or about the 1st day of August 1812 aforesaid, he was called into the service of the United States for the term of three months, and that while in said service, on or about the last days of September 1812 aforesaid, that he was detached for what was called Boat duty, in removing the boats of the United States from Schluper in the State of New York to Black Rock in said State, while thus employed he received a severe injury on his right leg that prevents him from performing further duty and that said injury or disability has continued to ca.. and at times renders him wholey unable to labor for his support. And he further says that the reason why he has not heretofore made application for a pension was a desire on his part to live without calling on the Government for assistance, that as he advances in years, the injury or disability became more disturbing and painful, and renders him less able to labor for his support, consequently he makes this application for a pension which he feels entitled to receive from his country, from the fact that he cannot now do but little towards his support by reason of said disability. And he further declares that the Officers above mentioned, are dead, but that Joseph B. Miller, whose affidavit is herewith amended, was a soldier in the same company, as also a Stephen Carroll, who was present when deponent was injured, and the deponent received no regular discharge.
Harvey Burgess

Stephen Carroll, the husband of Harvey’s sister Olive, who was still living in Cayuga County, New York made a statement in Harvey’s behalf: 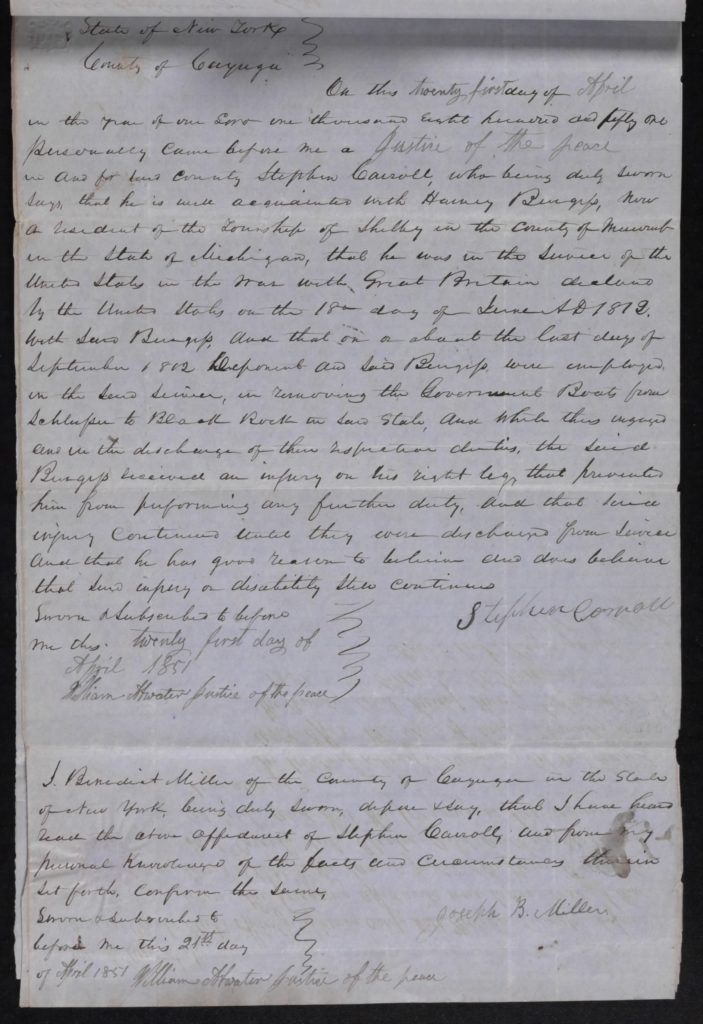 State of New York
County of Cayuga
On this twenty first day of April in the year of our Lord one thousand eight hundred and fifty one personally came before me a Justice of the Peace in and for said county Stephen Carroll, who being duly sworn says that he is well acquainted with Harvey Burgess, a resident of the township of Shelby in the County of Macomb in the State of Michigan, that he was in the service of the United States on the 18th day of June AD 1812 with said Burgess, and that on or about the last day of September 1812 deponent and said Burgess were employed in the said service, in removing the Government boats from Schulpler to Black Rock in said state, and while thus engaged and in the discharge of their respective duties, the said Burgess received an injury on his right leg that prevents him from performing any further duty, and that said injury continued until they were discharged from service and that he has good reason to believe and does believe that said injury or disability still continues.
Stephen Carroll

A Doctor Taylor examined Harvey at that time and made a statement: 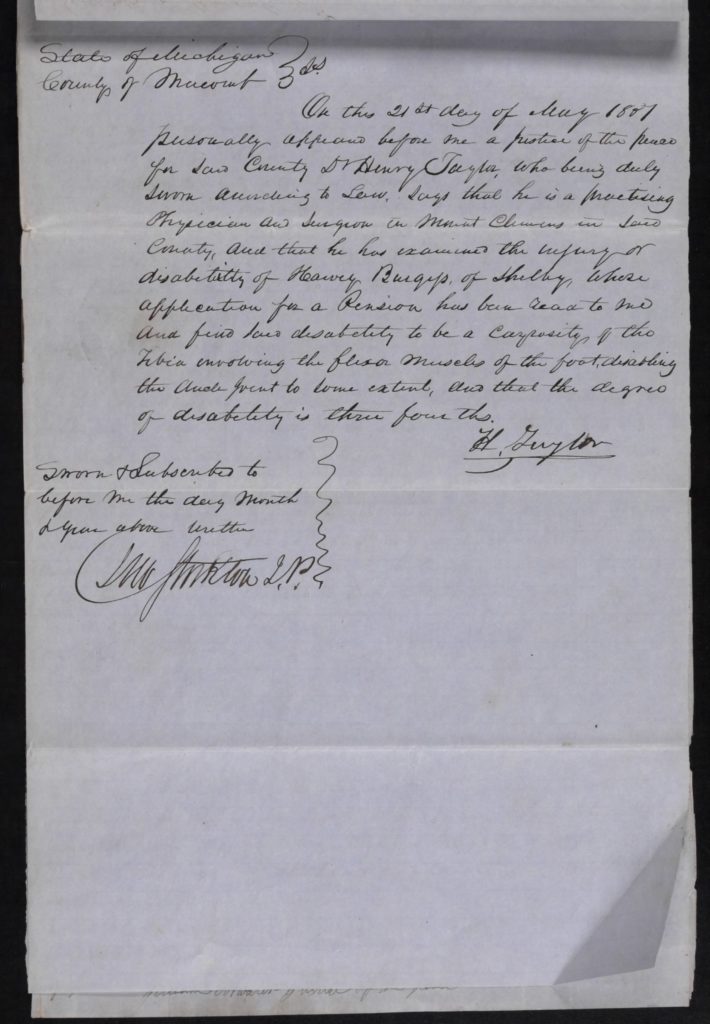 State of Michigan
County of Macomb
On this 21st day of May 1851 Personally appeared before me a Justice of the Peace for said County, Dr. Henry Taylor who being duly sworn according to law, says that he is a practicing physician and surgeon in Mount Clemens in said county, and that he has examined the injury or disability of Harvey Burgess of Shelby, whose application for a pension has been read to me and finds said disability to be a carposity of the tibia involving the flexor muscles of the foot, disabling the ancle joint to some extent, and that the degree of disability is three fourths.
H Taylor

This form apparently was filled out by Dr. Taylor: 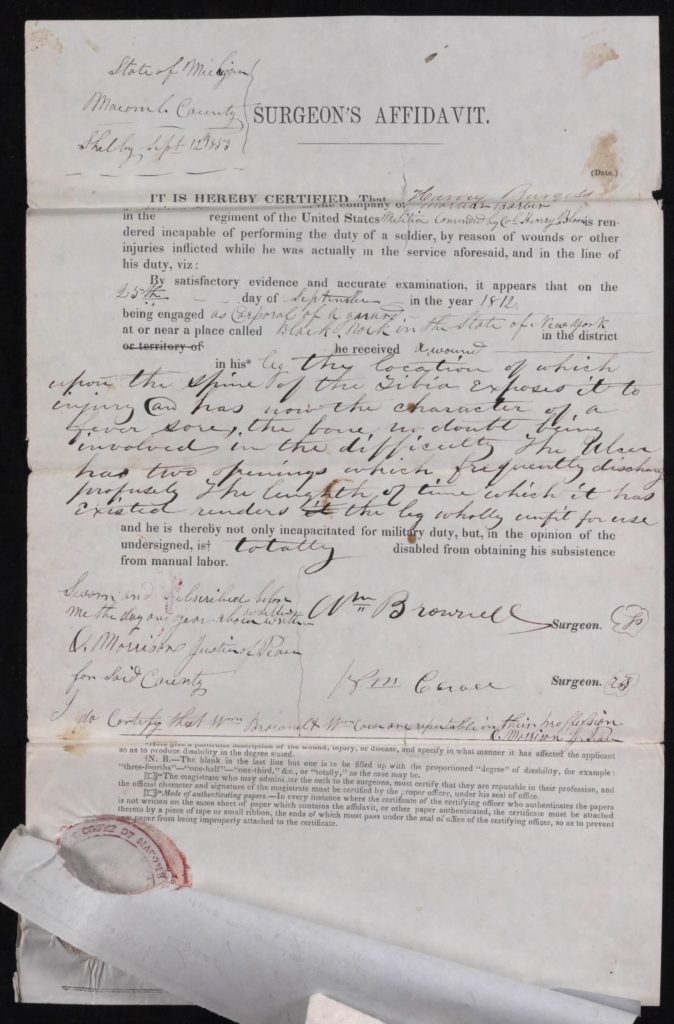 It is hereby certified that Harvey Burgess in the company of Martin Barber in the Regiment of the United States Militia Commanded by Col. Henry Bloom is rendered incapable of performing the duty of a soldier, by reason of wounds or other injuries infliced while he was actually in the service aforesaid, and in the line of his duty, viz:
By satisfactory evidence and accurate examination, it appears that on the 25th day of September in the year 1812 being engaged as corporal of a guard at or near a place called Black Rock in the State of New York . . he received
wound in his leg by the location of which upon the spine of the tibia exposes it to injury and has now the character of a fever sore, the bone, no doubt being involved in the difficulties. The place has two openings which frequently discharge profusely, the length of time which it has existed renders it the leg wholly unfit for use.. . and he is thereby not only incapacitated for military duty, but, in the opinion of the undersigned is totally disabled from obtaining his subsistence from manual labor.

The 1850 Census is the only one with an occupation listed for Harvey Burgess. He was living then in Shelby, Macomb County, Michigan next door to his son Zadock. Other sons Stephen, age 21 and Charles age 27 with his wife and child lived with Harvey and Mary. His occupation is listed as “cooper” the same as Zadock. They were likely in business together, but because of his injuries and age Harvey was probably limited in the actual work that he did. Charles and Stephen were listed as farmers and probably helped to support their parents.

Years went by without Harvey receiving a pension and then he passed away in in January 1859. After his death, his son-in-law Lorin Johnson made this inquiry about the pension: 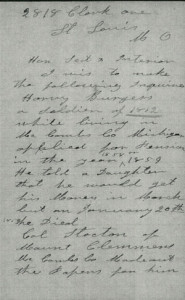 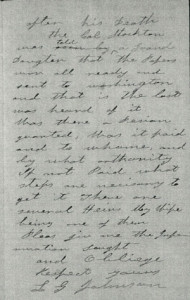 Hon Sect of Interior
I wis to make the following inquiry
Harvey Burgess a soldier of 1812 while living in McComb Co Michigan applied for pension in the year 1854. He told a daughter that he would get his money in March but in January 20th he died.
Col. Stocton of Mount Clemmens McComb co Made out the papers for him after his death.
The col Stockton was told by a grand daughter that the papers were all ready and sent to Washington and that is the last was heard of it.
Was there a pension granted, that it paid and to whome and by what authority. If not paid, what steps are necessary to get it there are several Heirs they wife being one of them.
Pleas give me the information sought and obliege.
Respect yours
L. G. Johnson

In spite of his service to his country and the lifelong disability he was left with, he never did receive a pension.