I took a genealogy class at the L.D.S. Institute of Religion when I was attending college. I don’t recall doing any real research, but I did keep the collection of articles, papers and forms I received for that class.

After graduating and getting a job in Salt Lake County, Utah, I went with my roommates one night a week to the Genealogy Library, which was then in the Church Office Building. I recall row after row of Books of Remembrance (in the same kind of binder my parents had) filled with sheets that had been submitted by church members. For over two years, I went week after week and made Xerox copies of family group sheets. For each generation of each line I found the listed parents on one sheet, then found the next sheet listing them as a child until I reached the end of that line. I never did find the point of dead end on all of my lines, but I had collected a large stack of family groups sheets. I found this process easier than the hand copying I had done as a child, even though it involved taking the sheets out of the binder to copy and then replacing them.

Shortly after I was married and moved further away from the library, I decided on another project. My parents’ Book of Remembrance also contained some stories of ancestors. Some were typed on legal size sheets and some were handwritten. I set out to type up all of the handwritten stories. I also made copies of the typed ones for my own Book of Remembrance. Later I collected more written stories from family members and from the Daughters of Utah Pioneers.

Some time later, after having children and my life revolving around this next generation for several years, I felt the pull to continue to work on my family history. Now I could go to the local Family History Library and using a computer I could pull up my family line on Ancestral File. Then I could download a Gedcom file onto a floppy disk, take it home and put it into my computer in my Personal Ancestral File database (PAF). It was amazing to me that in a matter of minutes I could gather as much information as it had taken me over two years to photocopy.

Several years later I began some serious genealogical research. I began making regular trips to the Family History Library in Salt Lake City. I spent hours pouring through books and looking at original records on microfilm. I could now access Ancestral File on the Internet, which became known as FamilySearch. Gradually actual records started becoming available online, which was much easier than looking at microfilm.

Through about a decade of serious research on my Eggleston line, I was able to discover more family members and gather information about them. I could easily add data to FamilySearch, but after gathering a considerable amount of interesting information and documents about many people, I realized the need to share this with others in a meaningful and tangible way. I also recognized the need to get it into an organized form as my organizational skills are not as good as my research skills. I had folders and binders with copies of records, but they were not easily shared. So I began writing a book. I organized it into family groups, generation by generation, and wrote in narrative form as much as possible.

This writing process took many years, as I continued to do research at the same time. I also took a few detours and compiled a book of biographies and histories of my grandmother’s family, the Cheney and Wilson line in 2003. And I wrote an article explaining how I sorted out the various Joseph Egglestons which was published in The Connecticut Nutmegger in June 2005. 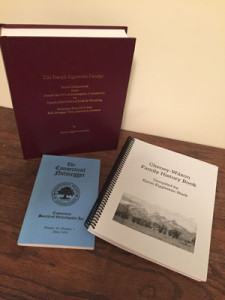 Finally in 2010, I buckled down and did final editing and indexing and printed The Joseph Eggleston Family. I remembered the counsel to “prepare a book of remembrance” and realized that this is what I had accomplished – A REAL BOOK of Remembrance.

A few years have now passed and of course I have made some new discoveries and found some things which need correcting in the Eggleston book. The idea of revising or writing an addendum to my book seems daunting, especially with the realization that as soon as I could get that accomplished, there would be more to add.

Remembering in the Digital Age

Things have changed in cyberspace as well. FamilySearch morphed into NewFamilySearch for a while. I was able to be a beta tester during the development of NewFamilySearch and used that opportunity to make corrections and add what I had found on our line. Then things changed again and with the new Family Tree on FamilySearch comes the ability to attach sources and add photographs, documents, and stories. Family Tree is becoming a shared Book of Remembrance where various family members can add what they have.

I have more than just photographs and documents to attach to a database. I also have stories of discovery – my personal experiences as I have learned about my family. These are worth remembering and sharing as well and hopefully can inspire others to join in this process. So now I begin using a new format – a blog – to share these stories along with details I have learned about ancestors and the information and photographs documenting their lives. There is flexibility here to display, share, and explain with some creativity. This can become an online digital family archive.

Through all these years of “preparing” a Book of Remembrance in all of it’s pieces and forms, the purpose has remained constant – To Remember. To remember our ancestors – to come to know those who came before us and to honor their memory. To remember the forgotten – to search for each individual family member and make sure they are connected to the whole family tree. To remember our roots – from which we gain a sense of identity and an understanding of our place in this eternal family.

3 thoughts on “Prepare a Book of Remembrance”