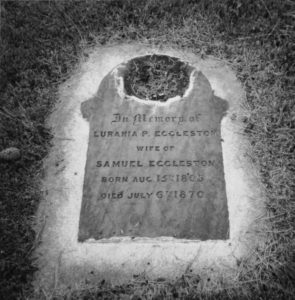 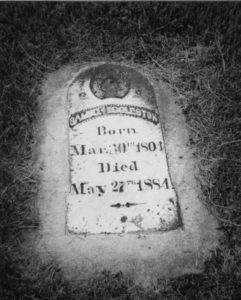 The Sexton records indicate that Lurania died of small pox. There was a smallpox epidemic in 1870 and one journal says that Mrs. Eggleston was the first to contract this disease and pass away. Two of her son Reuben’s children also died of smallpox that year. Afflicted people were quarantined at two locations: Farr’s Grove which was just north of the Cemetery on the other side of the river on land owned by the Farr family (Samuel’s daughter Mary married Enoch Farr, so this was his family’s land); and at Burch Creek (now South Ogden near my home) on land owned by the Stephen’s family (Orson’s first wife Constance Stephens‘ father John Stephens died of smallpox later that year).

When I searched Cemetery records years ago they showed an “adult mound” in this family plot, indicating that there was another adult buried there by Samuel and Lurania. I had thought this would be Catherine, Samuel’s widow. She had no children of her own, so it would be reasonable that the family would bury her there in an available plot, but also likely that no one followed up with a grave marker. The Cemetery Records now show Catherine buried in B-2-30-3E with her death/burial date of 9-8-1888. (I am not sure if this information was later found in other records, or was supplied by a family member, possibly the same one who created the Find A Grave Memorial)

Orson Hyde Eggleston died and was buried in Afton, Wyoming next to his third wife Anne Christine Johnson. His second wife Mariett Farley Eggleston outlived both Christine and Orson. She was buried back in the Ogden City Cemetery, but in another area not near the family plot. (D-10-9-5W) 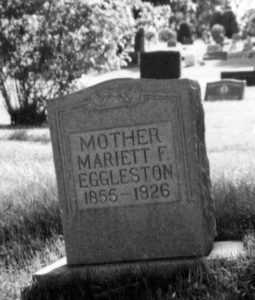 Samuel and Lurania’s son Reuben, his wife Emeline and several of their children are buried together A-1-27. Reuben began burying children in this plot soon after they arrived in Ogden. Daughter Ida May was born November 15, 1861 and died August 28, 1862. Son Charles Fredrick who had been born May 15, 1895 in Council Bluffs died here September 28, 1866. In 1870 they lost four year old Cora Gladys on July 26 and three year old May Julia August 6 to smallpox. Of their 12 children, only three survived both their parents.

I did not have photos of any of the headstones for Reuben’s family, which was surprising since I had been there repeatedly taking photos. I made another trip recently and thoroughly searched the area where they should be without finding any stones. Find A Grave does not have any headstone photos either. Maybe there were never stones placed there, or somehow they were destroyed or sufficiently buried to not be visible.

Samuel and Lurania’s daughter Mary Elizabeth Farr was buried with the Farr family. Though her husband Enoch Farr lived with his second wife later in his life, Mary is next to him in the Cemetery. A-5-25-3E 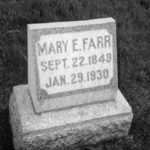 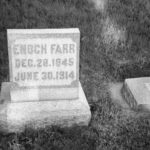 Their daughter Julia May Farr  died at age 17. Her headstone includes this touching poem:

A precious one from us has gone;
A voice we Loved is stilled.
A place is vacant in our home.
Which never can be filled.

God in His wisdon has recalled.
The boon His Love had given;
And though the body moulders here,
The Soul is safe in heaven.