I have always felt that this work is a collaboration between family members on both sides of the veil and that they are probably more anxious for us to know them, than we are. I truly feel that both Donna and I were directed on that summer day in 2010 – me to find Mariett and include her story in the family history, and Donna to learn more about the family. The bonus is forming a relationship with another living cousin.

During the summer of 2010, I made a decision to finally finish and publish the book I had been writing on the Eggleston Family. My research had spanned more than a decade. I had started writing early on, adding to it as I learned more. One of the great blessings of this process was finding many living cousins along the way. Some were very distant cousins, but others were second cousins that I did not know. I even became better acquainted with first cousins during that time. I had tried to include whatever information these cousins shared with me about different ancestors.

Anyone familiar with genealogy knows that no research or resulting book is ever “completed”. There will always be remaining questions, and hopefully information coming to light in the future to help solve the mysteries. When it comes to writing up the results of research, it is necessary to reach of point of decision that what is now known is enough to write, publish and share. So in 2010, after completing a rather large and involved project with the Weber County Daughters of the Utah Pioneers Museum, I decided now was the time.

I was mostly left with the final editing, documenting of sources -something which I should have been better at all along – and indexing the large volume. This is not the kind of thing that I enjoy – in fact, I hate it. I find research exciting, but indexing is especially tedious and boring. I could only work at it for short periods of time before I felt my brain turning to mush. So that summer, I forced myself to do this necessary task. Much of it was done while I was babysitting grandchildren. I found that after putting them down for naps, I could have about as much time as I could stand to work before they woke up and I had to quit.

During that summer of 2010, I was serving as the curator of the Weber County DUP Museum, so I also spend a good deal of time at the museum. I was usually running around attending to a variety of tasks or working in my “office”, which was actually a landing of the stairway where a computer desk was perched. One afternoon I happened to be near the research area where a lady was going through pioneer histories. I overheard her ask someone about the mis-spelling of a name. I heard “It is Farley with an A not Forley with an O”. This got my attention, as Farley was a familiar name, so I went over and met my second cousin Donna Tolman. She was a great granddaughter of Orson Hyde Eggleston and his second wife Mariett Farley. We spent some time talking about what we each knew about the family and I told her that I had written a book on the Eggleston family which I hoping to publish soon. She had some written information and photos of Mariett and her family which I was excited to see.

As I had researched and met cousins, I had contact with several second cousins through Orson and his first wife Constance. They had shared a good deal of information about her and her children. But I felt bad that I had almost nothing about Marriet and her children. I had actually been corresponding with two descendants of Constance who had recently asked some questions about Mariett. I quickly emailed them and shared my exciting news at finding Mariett’s great granddaughter. At the end of that email I wrote “I am thinking maybe Mariett wants us to know more about her.” 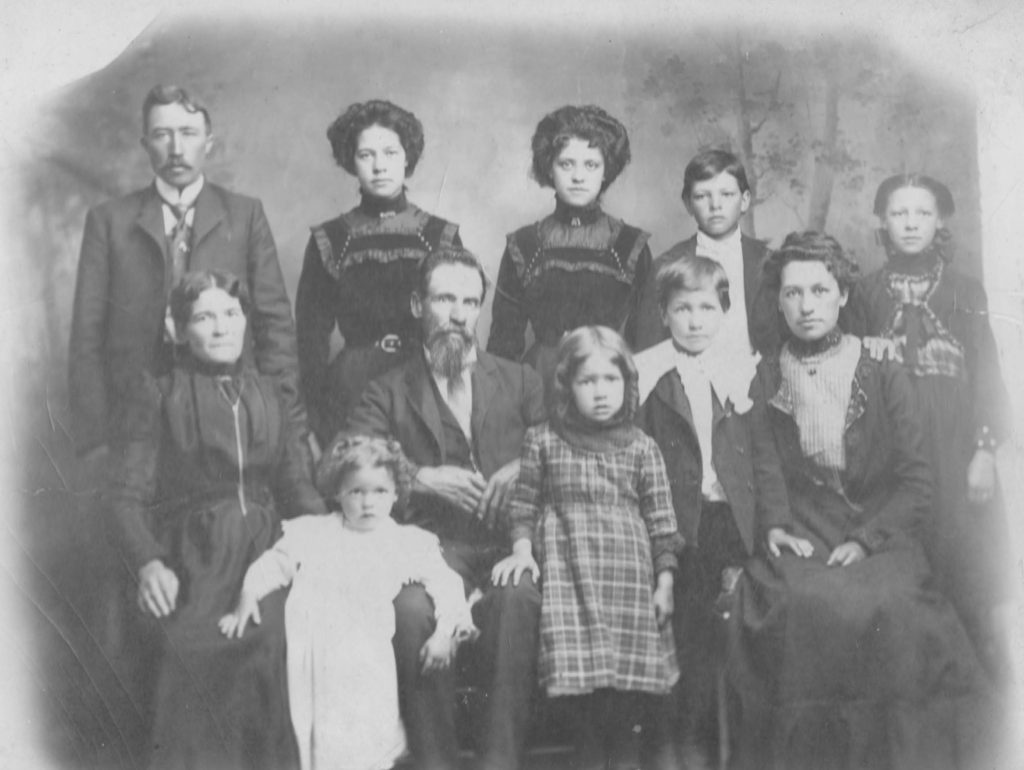 I got information and photos from Donna which I knew needed to be added to my book. I had indexed past that point in the book and adding it made it necessary to go back and shift page numbers for what I had already indexed. It was more work – tedious work I hated. (I have since found some places I missed and the index has the wrong page) But I was so glad to be able to include this new information. I was especially thrilled to have photos of Mariett and her family. The writings by Vedia, Donna’s grandmother, gave some additional insights into the relationships and activities of the family. I felt that Orson and Mariett would appreciate having that information included.

A few years ago, I became more interested in learning about my ancestors. I was looking for information about the Egglestons, who settled the Ogden area. As I was headed home from work one day, I drove by the Daughters of the Utah Pioneers Museum. The thought came to me that they may have some information. But I was tired and eager to get home. I told myself I could come back another day. Then a battle started. “You’re right here, you should stop.” “It’s not going anywhere. You can do it another time.” “You know if you wait, it might be a long time before you do it, just stop.” And at the last minute I found myself pulling into the parking lot.

When I went in, I was surrounded by delightful ladies who were eager to help me. When I asked if they had any information on the Eggleston, to my surprise, they said there was a lady who worked there who was an Eggleston, and that she happened to be working there that day. That is how I met Karen Stark, the great granddaughter of Orson Hyde Eggleston, through his third wife Annie Christine. She said she was just getting ready to publish a book she had written about the Egglestons, and that she didn’t have any information about Orson’s 2nd wife, Mariett, who is my grandmother’s mother, and that it grieved her to think that not much about her would be included in the book. I told her that I had pictures and my grandmother’s (Vedia Eggleston) autobiography, which gave some insight into their family life. To say that she was elated would be a huge understatement. She was able to put the pictures and information I had in her book, and I was grateful to know that Mariett, my great grandmother, now had a place there.

I think often of the miracle of that day. There, Karen was, about to publish her book not having found any information about my great grandmother, and I walk into the DUP museum. I am searching for information about the Eggleston line, and walk into the museum to find a second cousin, and a month later receive a copy of the book she wrote about generations of Egglestons, which I would not have, if I had not stopped that day.

It was just a few months after publishing the book, that my daughter picked up Donna’s grandmother’s postcard book in a local antique shop. When I saw the names on the cards – Vedia Eggleston, and her siblings Clara, Connie, Lottie, Asa – I realized that this was Donna’s family. I sent her an excited email, after searching frantically for a phone number and not finding it. She was so thrilled to receive this tangible trace of her family history. We both consider this find a miracle.

I call this the miracle of the postcards. There are so many things that had to happen in just the right order for this album to be restored to our family. Too many to be “coincidences”; that I met Karen at the museum just months before, and because of that she knew Vedia was my grandmother. That they happened to be in the antique store, and that Karen’s daughter happened to pick up the album and that she thought to show it to her mother. . . The timing of it all is truly miraculous. I know God’s hand had to have been in it. It tells me that God knows who we are, and that He wants us to feel close and connected to our loved ones who have passed from this life. I know He wants us to learn about their lives and the rich heritage they have given us that it might strengthen and inspire us. And that is the true miracle of the postcards.