On July 23, 1889 they stopped at Salem, now Sugar City, Idaho, where Sylvester’s brothers, Elijah Nicholas and Henry were living. Nick had gone to Jackson Hole to help some bachelors put up hay.

After visiting a day or two, they moved on to what is now called St. Anthony, Idaho. There were not many settlers there at that time and only one building. They got logs for a house and had it up to the square. They had been looking around but could find no hay for their cattle that winter.

The Wilson boys went for a load of logs, which took two days. They made their camp that night and were getting supper over the camp fire when a man came along and asked if he could camp with them. They made him welcome and after they talked for a while, he asked them their names. He happened to be their Uncle Nick Wilson. 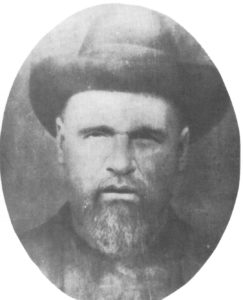 Nick had just came back from Jackson Hole, and not having seen them for several years did not know who they were until they told them. He stayed in camp and visited a day or so with them. He told them there was plenty of native hay in Jackson Hole and that they could go over and put it up, and then the boys could drive the cattle over and feed them that winter, and take them back out in the spring.

The Journey to Jackson Hole

Mary, Sylvester’s wife, had heard erroneous tales about outlaws coming to Jackson Hole to hide out. She was concerned about her boys being left to the mercy of the bad men. Therefore a few days later, Nick with Sylvester and his boys, John, George and Charlie started with the running gears of a wagon and their pack horses and saddle horses toward Jackson Hole. Sylvester’s daughter, Rebecca, and Uncle Nick’s daughter, Kate, went along to cook for the men.

They left their cattle grazing at a place near St. Anthony, then called Hog Hollow. Ervin, Elias and Selar Cheney stayed to tend the cattle until they were ready to be driven over.

When they brought the wagon as far as the mountain, they had to take it apart. They took two wheels over at a time and cut trees out of the way as they went.

Bringing all the Familes Over Teton Pass

In October, when the hay crop was up in Jackson Hole, the men, Rebecca and Kate all returned to Idaho to move their families to Jackson Hole Country.

Uncle Nick and family decided to move to Jackson Hole with Sylvester’s family. They came to St. Anthony, and with them they had their married daughter, Louise, and her two little boys. They had two covered wagons while Ervin had one and Selar Cheney one.

When they arrived near the mountain, they stacked their flour, grain and such things as would be excess weight, near the trail and built a crib around it and covered it to protect it from animals and the weather until they could return for them with pack horses.

They started their journey over the pass on October 18, 1889. They had to chop trees down along the trail until it was wide enough for the wagons to pass through. The western slope over these mountains was so steep that it required six horses to pull a wagon to the top of the pass. Blazing the road as they went along was very hard work and they did not get very far in one day. When they got to the top of the mountain, they cut large trees and tied one to the back of each wagon and put a roughlock on and let them down as carefully as possible. Theirs were the first covered wagons to come over the Teton Pass.

It took two weeks to make the journey over Teton Pass and they arrived in Jackson Hole on November 11, 1889. They returned to bring their food supply over the pass later on horseback.

The Jackson Hole Community in 1889

Jackson Hole was then a unsettled region to which they were almost the first comers. Billy Green owned the Slough Grass Ranch at that time and Martin Nelson helped him put his hay up. Martin Nelson and his wife, Betty, and four year old daughter, Cora, had come to the country in July.

Mrs. Nelson was the first white woman to come to that country to settle. Rebecca and Kate Wilson were the next white women in the country.

The Nelson family and the friendly bachelor population of 40 graciously welcomed the Wilson and Cheney families. Being so late in the season, there was no time before winter set in to cut logs and build homes. Mr. Karns, who had just completed his new house and moved in, offered Sylvester and his family his old two room cabin to live in. Will Crawford shared his home with Uncle Nick’s family and Louise and children. John Cherry graciously opened his home to Ervin Wilson and his family.

The First Christmas in Jackson Hole

The first winter was a pleasant one and yet a hard one. Their milk cows perished and they lived the most part on Elk meat and water gravy. During the long winter nights they burned a piece of twisted cloth soaked in Elk tallow. This light was called a “bitch” light.

On Christmas all the residents gathered at Will Crawford’s home for a feast and celebration. Each household contributed their share of the victuals of elk steaks, roast wild geese and ducks, vegetables, plum pudding, mince pies and delicious doughnuts fried in bear grease, which also makes delicious pie crust.

After a wonderful dinner, the dishes were washed and the floors cleared for dancing. The orchestra was composed of violins, a banjo and one guitar. The violins were played by Selar Cheney, Sylvester Wilson, Nick Wilson, John Karns, and John Holland. Brig Adams played his banjo and Andy played his guitar. They took their places in one corner of the room, partners were chosen and the dance was on. Since there was a scarcity of lady partners, the men would choose partners from their own sex and then everybody would dance.

Supper was served during a brief intermission at midnight, and in the morning they ate breakfast before departing for their homes. They never traveled after night in those days as the roads were not good. Everyone enjoyed themselves and had a wonderful time. 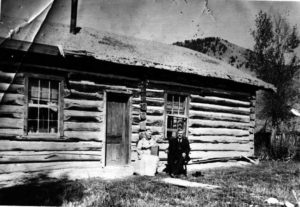 Selar and Mary Alice Wilson Cheney by their home in Jackson Hole, Wyoming. The cabin where the first Christmas was celebrated would have been similar

I combined several accounts which are all in my book: Cheney Wilson Family History Book. Those accounts and sources for them include:

“The Early History of the Sylvester Wilson Family and the History of Wilsonville” by Byron J. Wilson, 1989.