A continuation of the account of my journey with my Dad in 2001 when we visited sites significant to Eggleston genealogy. This Part 3 was in the Western part of New York August 8-9, 2001.

After leaving Nauvoo, Illinois we spent some time in Kirtland, Ohio. The Egglestons did not live there, but the Cheneys did. Dad and I did not do anything specifically related to Eggleston genealogy, so for the purposes of the blog, I will move on to Western New York.

We left Kirtland about 3:30 in the afternoon on August 8th. In Erie, Pennsylvania there was an accident, then road construction slowed us. We got off the freeway to get gas then seeing how backed up it was decided to try an alternate route. Later we managed to get back to the freeway and it was a little better. We split from the expressway as it entered New York. Then we took the southern route through Chautuaqua county.

I was excited to see this area. I had done a good deal of research into family members who went to Chautuaqua County, New York. We didn’t stop because we were detoured around construction, so we really didn’t know where to go. We just drove around Chuatuaqua Lake which is pretty. I tried to take a picture from the moving vehicle, but it didn’t really capture it. 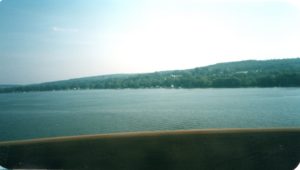 The country here was rolling hills and it appeared to be good farming land. We then drove on the Southern route through the Allegheny mountains. I hadn’t realized that New York had such mountains.

It was getting late and I was looking for a campground as we drove. We found the Sun Valley Campground near Arkport, New York. It was getting dark as we pulled in and we couldn’t find anyone in the office, so we just found a spot, then registered later. There weren’t restaurants around, so we zapped some microwave dinners. We planned to visit Springwater in the morning.

Springwater is a mysterious black hole of our family history. Samuel Eggleston‘s brief biography indicates that his father Samuel Jr. moved the family from Marcellus to Springwater when he was 13 years old. That places the move about 1817. Both of Samuel’s parents died in Sprinwater, Elizabeth in 1823 and Samuel in 1830. Many of their children married while they were in Springwater, but eventually they all moved away.

It has always seemed strange to me that Samuel apparently moved away from all the family in Marcellus to go to Springwater by himself. Most migrations were done as a family group, sometimes with members going at different times, but usually there was something to connect them to the new place.

Eggleston family members had started migrating to Chautauqua County, but Samuel chose to go to Springwater rather than join them there. I have begun to wonder if other family members went to Springwater with him, then quickly moved somewhere else. I also have to wonder if Samuel intended to join family in Cahutauqua County, but something caused him to stop and settle in Springwater. He did buy land there, so there must have been a plan to stay.

There may be some clues to the reason for this move in events of the year 1817.

During early 1817 there were some interesting things happening in the Marcellus Baptist Church. Samuel Jr. joined the Marcellus Church in 1807 along with his brother Nathan. Elizabeth Eggleston was baptized a different day. John Eggleston, who may be another brother, also joined the Church that year.

Samuel had some difficulties with the Church beginning in 1816. Brothers were assigned to work with him. In March 1817, records indicated that he had a desire to continue with the Church, but on September 7, the members voted to exclude him.

In April of 1817, Elizabeth was given a letter of recommendation. This would be a letter to introduce her to another church, letting them know she had been a member in good standing. This letter would indicate that they were planning to move.  Also on April 17, 1817, Samuel and Elizabeth sold their land in Marcellus, which would also indicate plans to move.

That same year Oliver Eggleston joined the Marcellus Church, then quickly had some issues with them and he was excluded from membership. We know nothing about his life after that point. John, the one who also joined the church in 1807, and his wife Rachel sold their land in Marcellus in October of 1817. They then seem to have disappeared off the face of the earth.

The year 1817 could have been one of those “purging times” when the Church became strict about covenant behavior and excluded those who were not living up. Possibly these Egglestons may have had problems getting along with other church members and even family members. Maybe the conflicts were so severe that moving seemed a solution?

Both Samuel and John owned land along the lake. Were there issues with their land?

As we drove into Springwater that morning, I saw why maps showed so many places called “gull”. The land is very hilly – full of hills and gullys, with the main part of town being in a small valley. A History of the town of Springwater placed the Eggleston farm “On the east hill south of the big gull.” There were so many hills and gulls and no way to tell which this referred to.  It is very wooded, but there are many farms. I thought that this would not be the easiest land to farm, though it is very pretty. 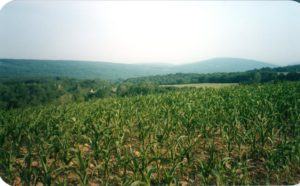 View of Springwater from the Ashley Cemetery on the south end of the town.

We began and ended Thursday August 9th in Cemeteries. Knowing that both Samuel and Elizabeth had died here, I was hoping to find their graves. I had searched online before going and found no online records of their graves, but I did find 10 Cemeteries. It would have taken lots of time to find and search all 10, so I picked out a few close to the main road. Some were well kept, but others very neglected. I could see the possibility of buried, broken or unreadable stones that might be theirs.

We stopped first at the Ashley Cemetery which is on the south end of the town up on a hill. There was a beautiful view from there and I took a picture. This was a nice, small, and well kept cemetery, but no Egglestons.

We looked for the Green Gull Cemetery, which seemed like a possibility since a town history placed Egglestons “On the east hill south of the bill gull.” After a few times down the road, we found “Greens Gull” a wooded gully which appeared to be private property with a home there. We saw no sign of a Cemetery.

Find a Grave currently has 67 memorials for graves there. The earliest burial was 1829. Interestingly Amos Root, who purchased Samuel Eggleston’s land from his children, is buried there. This cemetery actually may have been close to the Eggleston farm.

We then went to the main part of town, such as it is. There are really only a few buildings which would constitute “town”. The Capron Cemetery was a very small, old cemetery on a side street. We almost missed it altogether. This was a very sad place. Being so close to town, it was disappointing that it was so neglected. Many of the stones were broken, buried or unreadable. We looked but found nothing.

It is supposedly the oldest cemetery in town, with burials beginning in 1810. According to Find a Grave there are 27 known burials plus some unmarked fieldstones. It is possible that Samuel and Elizabeth are buried there, but we would never know if they were in one of those graves.

We went to another Cemetery in similar shape. This was the “Christian Church Cemetery”. There is no longer a church anywhere near. I had thought this less likely because the Egglestons were Baptists and “Christian Church” sound like it would be another denomination, but it was accessible so we looked around. It was very overgrown and the remains of a tree fort on the edge of it suggested that it had been some kind of spooky playground for kids. We didn’t find anything.

The last Cemetery we searched was the Evergreen Cemetery which was much nicer and kept up. It also had many newer graves and appeared to be still in use. The stones were easy to read but no familiar names.

We finally bid farewell to Springwater, leaving behind the mystery of the burial places of Samuel and Elizabeth. We drove on winding country roads to Manchester and Palmyra.