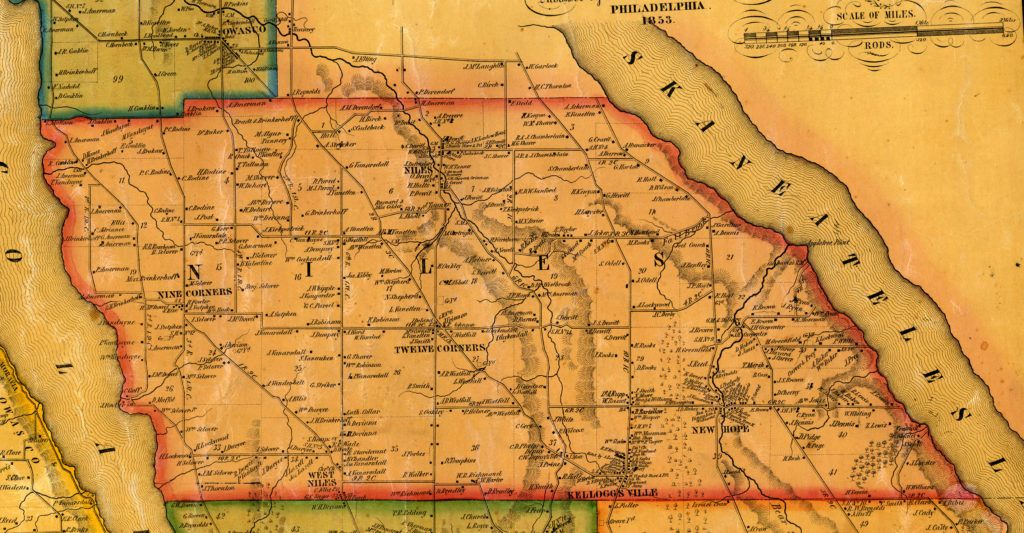 We went to the New Hope Mills, which had been recommended. They were closed for the day. (This was just after 4:00) We did walk over the covered bridge and saw the 1823 vintage water wheel. 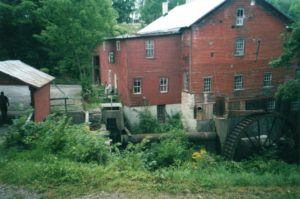 We drove around the area a little. There is a picnic area closer to the lake which is said to be a childhood play area of Millard Filmore. Not too far from it is the area on which is written T. Marsh on the 1853 Map. 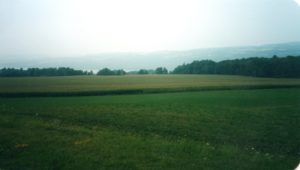 We stopped here, where there is a beautiful view of the lake (would have been more beautiful without all the clouds). From the road the land slopes gently down to the lake. Across the road, going up a hill, is where the Marsh land would have been. This is mostly cleared farmland.

I assume that Samuel and Lurania Eggleston would have lived somewhere near there. Samuel went back to Sempronius after his family had moved to Springwater. His brief autobiography states:

Thomas Marsh, who had married Samuel’s sister Lucy, would have been the brother-in-law Samuel would have lived with. It was while living here that Samuel married Lurania Powers Burgess, whose family lived nearby.

Sempronius in Cayuga County, New York is where the Burgess family settled. Seth Burgess brought his family from Stillwater, Saratoga County to Sempronius around 1800. He purchased the entire Lot #47. According to maps the Kellogsville Cemetery was on this original land owned by Seth Burgess. The area consists of farms and some wooded areas. 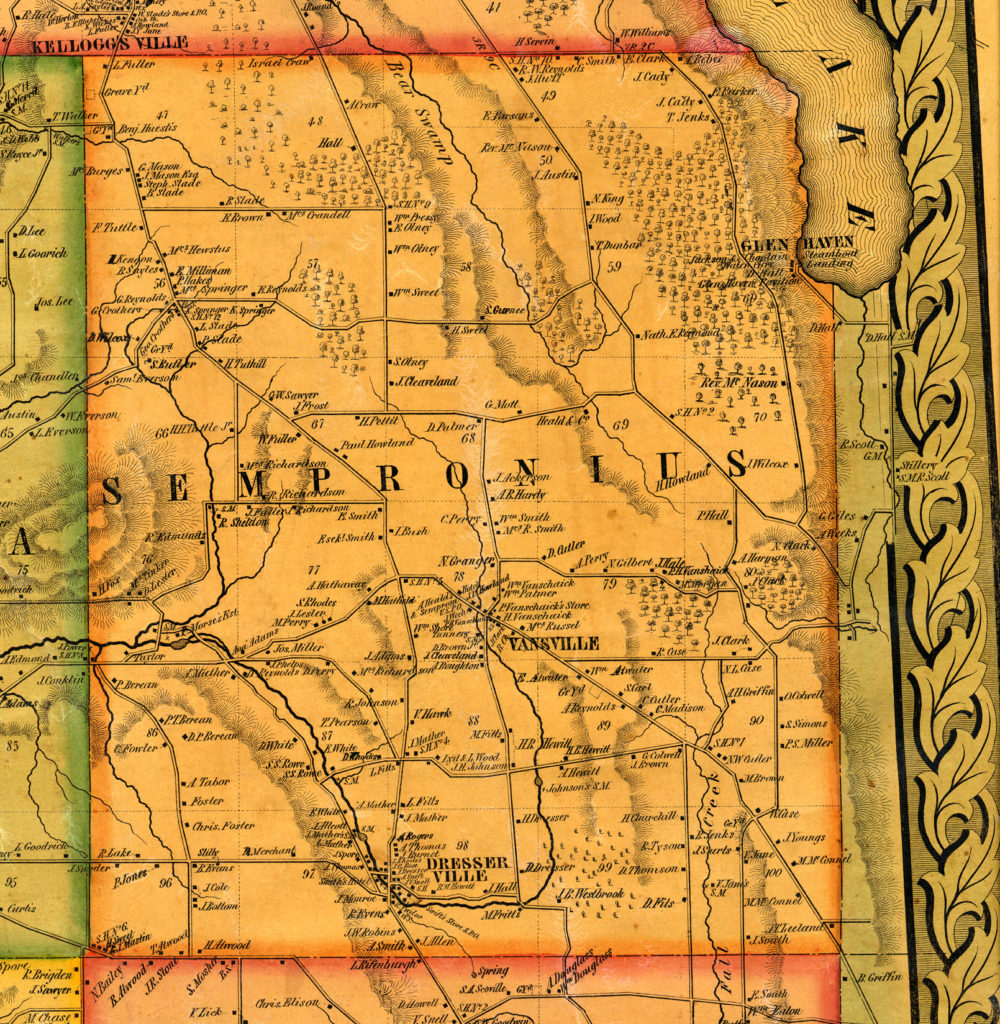 Early map of Sempronius showing Lot #47 in the upper left corner, just below where it says “Kellogsville”

The original township of Sempronius was later divided up to create two additional towns – Niles and Moravia. Niles was to the north and we passed through that area first. Moravia was to the west and was where we later spent the night. 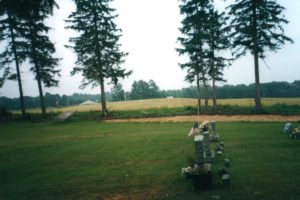 We easily spotted the Kellogsville Cemetery and started looking around. I found Thomas and Lucy Eggleston Marsh’s graves. Thomas’s stone faces one way (the way most are facing) and Lucy’s next to it faces the other way. Leaning on Lucy’s stone is another broken off stone which is Lucy Marsh, a daughter of Thomas by his second wife, who died at age 14. 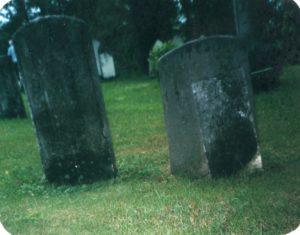 I was going around with my notebook writing inscriptions. Thomas’ stone reads:

To live in Christ to die is vain

Lucy’s has a nice verse on it:

Go home my friends, Dry up your tears.

We shall meet again When Christ appears

I was walking around with my camera taking pictures. Then it started raining. At first it was light and I just kept on, then it started to get heavier and Dad got umbrellas from the motorhome. We must have looked like idiots wandering around in the rain, me clutching my notebook so it wouldn’t get wet. I wanted to find Seth and Olive Burgess, but the rain was really getting bad so we quit.

Refuge from the Storm

We drove in the rain down the old salt road (The road the Cemetery is on) to Sayles Corners, which was named after the Sayles family who migrated with the Burgess and Titus families. Then we drove on down to Moravia. We passed another large Cemetery, but didn’t stop. (As the trip went on every Cemetery we passed made me want to jump out and look at headstones.)

It was really pouring as we got to the Village of Moravia. I remember seeing Cady’s Tavern which I had read about. We found a Pizza Place, parked at a nearby bank parking lot and ran to it. Even with umbrellas, we were wet when we got there. This was the happening place in town. They did a take out business as well as having a few tables to eat in. We ordered and waited and waited. People kept coming in dripping wet to get take out orders. My feet and legs were covered with wet weeds from the Cemetery and even though it was raining it was still warm enough to be steamy. We finally got our pizza and ate it.

After eating, we got directions to Fillmore Glen Stake Park, which happened to be just down the road. When we got to the park, I made a phone call at the office to the Thorn Hill Church. I had contacted the pastor before our trip, so I wanted to let them know we would be there in the morning. I also tried to call the Sempronius Church but just got an answering machine and we had no number for them to call back.

Filmore Glen State Park was a nice park and campground, but it rained almost all night so it was too wet to enjoy it. The roof of the motorhome started leaking sometime in the night. Dad got up about 5 am to check on it, then our neighbors got up early so it was not a great night’s sleep.

In the morning we drove around the park a little. We saw Millard Fillmore’s cabin which is there at the park. I think it is the cabin where he was born. It is a simple small log cabin. Since he was a contemporary of Samuel and Lurania Eggleston, I think the early homes of the Burgess family there were probably similar cabins. Later they would have been added on to and improved or larger houses built.

We drove through the “glen” which is like a miniature grand canyon. It is interesting that just a short distance from the Village is this big gash in the earth which is actually quite deep. The area was really wooded and there were bugs. It had stopped raining but was foggy, giving the place an eerie look. 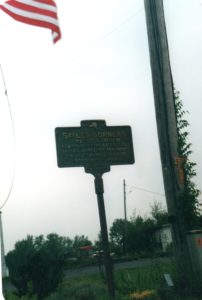 We drove back up through Sempronius and stopped at Sayles Corners to read the Historical marker. The Burgess’ land was just up the road, so they were quite close neighbors. I think Rhoda Titus must have lived somewhere in between those families.

I wanted to look some more at the Kellogsville Cemetery for Seth and Olive Burgess, so we stopped and looked around again. I went to where I had left off, but Dad noticed another area we hadn’t even seen the day before. This was beyond a little gully and up on a little hill. It was very overgrown, not well taken care of like the rest of the Cemetery, and appeared to be the oldest part of the Cemetery. 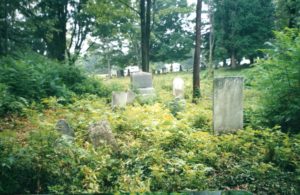 Dad yelled to me “Does Olive Burgess mean anything?” He had found Seth and Olive’s graves. Seth’s stone is very worn and hard to read but it is next to Olive’s which is clear. 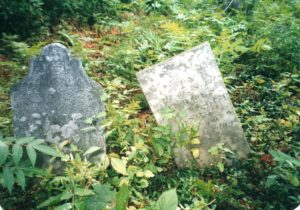 Headstones of Seth and Olive Burgess

Then Dad stepped on a stone laying on the ground. After removing some leaves we could see that it was Joel Burgess, their son who had died in 1807, probably one of the first burials there. We looked around and I was sad to see more broken and worn stones. I think Rhoda Titus must be buried there also, but probably unmarked or one of these unreadable stones.

I felt some satisfaction in finding these graves and was now ready to drive around the lake to Marcellus.