In August 2014, I received an email from Jill in Cornwall, England asking about some Eggleston deeds that I had posted on the Cayuga County, New York Genweb page that she had not been able to access. I was going through a family crisis at the time, so neglected to respond to her for a few months. When I finally did, I asked her which Egglestons she was hoping to connect to these deeds. Her response sent me on a quest. The result of this collaborative effort with Jill resulted in what I believe is an expansion of the family tree and possible solution to a mystery.

Jill was trying to find information about Leonard Eggleston, who was the son of Nathan Eggleston and Laura. This family had lived in Auburn, Cayuga County for some time. These names jumped out at me. I had listed a Leonard Eggleston among the mystery Egglestons at the end of my book. (P. 649-650) I first found mention of a Leonard Eggleston in the records of the First Baptist Church of Marcellus, which was in neighboring Onondaga County. He was on lists of Church members, one dated 1849. 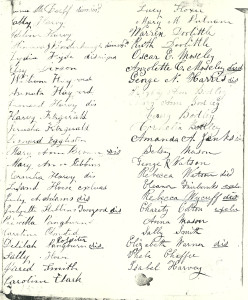 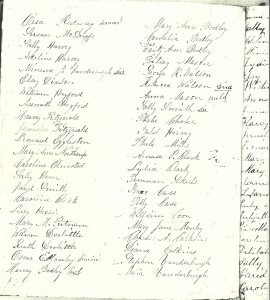 There was also a Laura Eggleston mentioned in those same church records. Laura had joined the church by letter in 1817. The records did not say from where or when she came to Marcellus. Oliver Eggleston joined the church about the same time. Oliver later had difficulties with the church because of foul language. Giving testimony about these allegations were his brothers Nathaniel and Edward and also Laura Eggleston. Edward and his wife Sybil lived in various towns in Cayuga County. 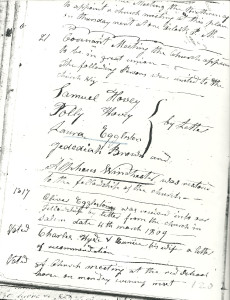 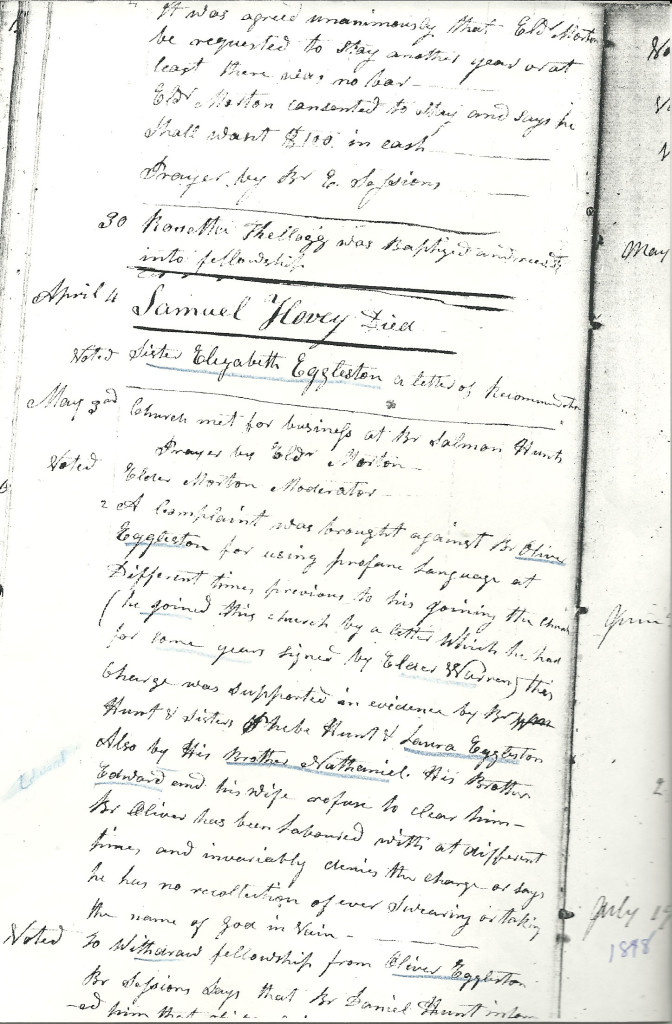 There were three Nathan Egglestons in Marcellus at one time. Samuel Eggleston had a son Nathan who also had a son Nathan, but in the 1810 and 1820 Census there was an extra Nathan. In 1810 the name reads NathanL. I had thought that this extra Nathan might be the Nathaniel mentioned in the Church records, which would make him a brother of Edward and Oliver.

I had found a Leonard Eggleston who was born January 19, 1824 in Skaneateles, New York and had a wife Adeline. They were in the 1850 Census in Dryden, Thompkins, New York, then later in Michigan. This is the information I included in the Mystery Egglestons section of my book. Frank E. Robbins in his “Egglestons in the Michigan Census” placed this Leonard in the line of Bygod’s son James. I had made an assumption that the Leonard in the Marcellus Church records was the Leonard with Adeline in Thompkins, Co., but now was questioning that.

It appears that this Leonard in the Church records was the son of the Nathan and Laura who had also been in Marcellus for a time. The fact that they had lived in Auburn also made sense to me because if this Nathan/Nathaniel was the brother of Oliver and Edward, he likely was also the brother of Richard C. Eggleston and Joan Eggleston Lewis who had also lived in Auburn. Richard died in Auburn after being cared for by his sister Joan. His descendants have a number of family letters, one of which mentions ‘Old Uncle Nathan’.

Jill shared some other bits of information about Leonard’s family. She had his death certificate which indicated that Leonard married Olive Whiting when he was 26, which would have been between May 1848 and 1849. Her family was living in Marcellus in 1820. 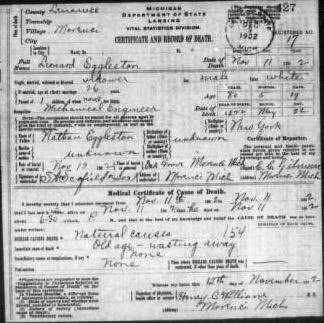 Jill had found a Legal Notice posted after the death of Robert T. Mitchell of Homer, Cortland, New York. It was directed to Elizabeth H. Birch of Seneca Falls and Lillian Berry, daughter of Charles Eggleston, and to any other possible heirs. 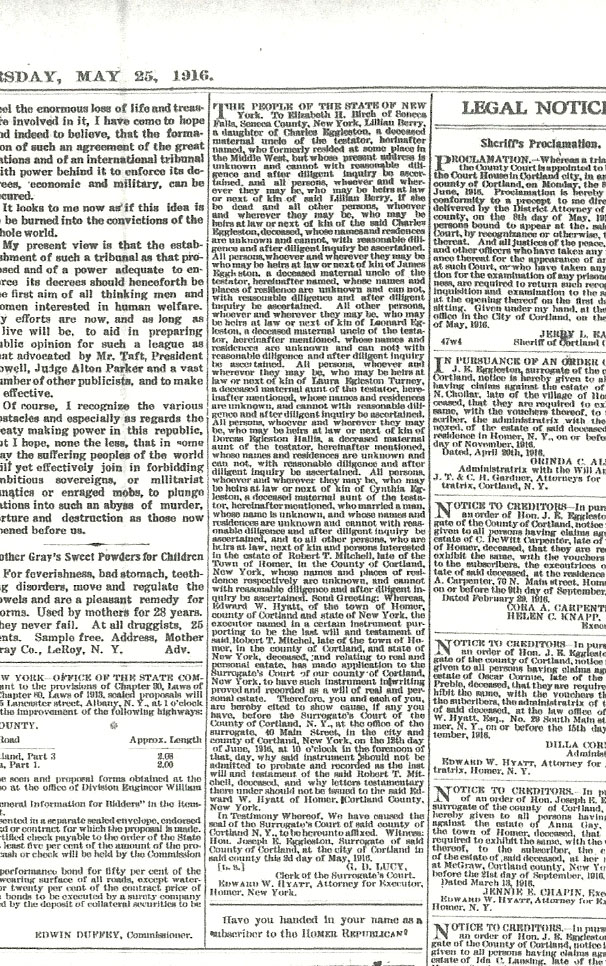 With the information in this notice and some searching, we were able to piece together this family. It was interesting to me that though Nathan and Laura had ten children, they actually had very few descendants after two generations.

1810 Census Marcellus, Onondaga, NY: NathanJ Eggleston 1 male under 10; 1 male 26-45; 3 females under 10; 1 female 16-26. (There were 2 Nathans in the same town. This Nathan should have been 22. Laura would have been rather young to have 4 children. The enumerator of this particular census used many abreviations, ie. Saml, Benjm, Jno. The J after Nathan has no space and does look more like other J’s than the small l and he is listed next to a Nathaniel which is written out)

CHILDREN OF NATHAN EGGLESTON AND LAURA:

Dorcas Eggleston was born 1814 Wash Co., New York. Dorcas married Charles W. Hallis, who may have died before 1855. She may have had a son.

I always thought it odd that there appeared to be 2 people called Helen Eggleston in Seneca Falls, one in 1850 and one in 1860 with 2 different families. I now think they were one and the same person.

Firstly, in 1850, there was the family of James Eggleston, wife Jerusha and children Jennie aged 7 (transcribed as Jane), William aged 5 and Helen aged 2. Secondly, in 1860, there was my husband’s family, Leonard, Olive, Helen aged 10 and Charles C. Gilman b. 1844. On the basis of later and more accurate information, Jennie was born August 1846 and William July 1847.

Thanks to a legal notice I found in a newspaper via FultonsHistory, I knew that Leonard had a brother James so have assumed that the family referred to above was him. I can’t find James on the 1860 census, but at some time the family moved to Michigan and Jerusha died on 18th June 1855, aged just 30. She is buried in Oakridge Cemetery, Marshall, Calhoun County. In 1855, Jennie would have been 9, William 8 and Helen just 5. Jane and William may have been old enough to work and help their father, but not Helen. I believe that Helen went to live with her uncle Leonard and Aunt Olive in Seneca Falls, perhaps immediately following Jerusha’s death. Having looked at the 1860 US Federal census many times for my husband’s family, I had always assumed that as Helen had the same surname that she was Leonard and Olive’s daughter, but the 1860 census does not show relationships, so she may well have been their niece. They did have a son, George L, born 1st July 1850 who died in September 1851, but I had thought that he was Helen’s twin.

Having found a Helen Eggleston I was interested in on Ancestry, via a Google search I found an extract from a book about the Slocums of America and the record of a marriage between Helen Eggleston and Silas P Slocum on 25th October 1869. It said that Helen was the daughter of James formerly of Seneca Falls. Thankfully, she lived to a ripe old age so the later census gives more information on her. She was actually born in June 1850, so in that year would just have been a few months old when the census was taken, not 2 – presumably the census taker should have recorded her as being 2 months old. I have come across that mistake before.

In addition, thanks to a lot of helpful people on Find-A-Grave, I know that the Helen Eggleston I thought was Leonard and Olive’s daughter is not buried in the family plot at Restvale. The only other possibility as to what had happened to her was a marriage and therefore a change of name. This all fits with the other Helen.

The only fly in the ointment is in regard to James. He died on 3rd July 1893 and is buried at Three Rivers, St. Josephs, Michigan. His headstone gives his date of birth as 3rd March 1822. The date of birth I have for Leonard Eggleston (from his death certificate) is 22nd May 1822. One of these must be wrong. Certainly the census details for James give varying ages, but on the basis that he was born in March, the majority would make his year of birth 1821.

However, this conclusion does solve a mystery that has been puzzling me for a long time. Leonard’s death certificate says “number of children 1 – number living 0”. That child would be George with Helen as his niece.

I found in the 1850 Census Waterford, Saratoga Co. the Simeon Halladay family with Emily Smith 18 and Henry Smith 25 with “married within the year”. It appears that Emily married Henry Smith and had daughter Sarah in 1853 in Saratoga County (1855 says she was born there).

In 1860 Joseph is with his mother and sisters, so I wondered where Sarah would have been if she was the daughter of he and first wife Sarah. In 1860 the Holladays were in Seneca Falls without anyone else with them. I can’t find Emily and Sarah in 1860.

After Joseph’s wife Sarah died, he married her sister Emily who had this daughter Sarah Smith. I think there is still some possibility that Sarah Smith was the mother of this Elizabeth who is with the family from age 1 in 1870 and then is listed as Elizabeth Orman adopted daughter in 1880. If Sarah had her at age 17, her parents may have just raised her? I couldn’t find an Orman family anywhere near them.

Charles A. Eggleston was born about 1831 NY. Charles married Harriet Feeck. She was born 1835 in New York.

Of course, there are still questions and the possibility I may have misplaced this family. These are some of my questions:

Nathan was in Marcellus 1810 with his father Joseph and other family members, but he did not own land there. He had a wife and 4 small children in the 1810 Census, yet these nine listed children of Nathan and Laura were all born after 1810. The 1865 Census where Laura was with Cynthia and Andrew Bradley, indicates she was the mother of 10 children. It appears there is a missing child, who may have been born before 1810 and been one of those in the 1810 Census. Did this child die and therefore was not mentioned in other records? Or was Nathan married previously with other children by a first wife? The birth locations of some of the children might indicate that Nathan went back and forth between Marcellus and Washington County. There were other family members still there. If Laura came to Marcellus shortly before 1817 when she was mentioned in the Church records, (Or by 1815 when Cynthia was born there) it would make sense that Miriam and Dorcas were born in Washington County.