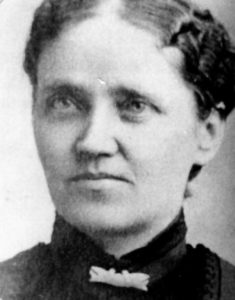 Annie Christine Johnson Eggleston was born November 7, 1864 in Salt Lake City, a daughter of Peter Johnson and Ane Maria Madsen. Her parents had immigrated from Denmark separately just a few years earlier. They married September 27, 1862 in Salt Lake City. Annie Christine was their second child and was born before they moved to Eden. She was known as Christine, probably because her mother was Ane Marie and her older sister Annie Marie. She grew up in Eden on the family farm. Her father died in 1878 when she was 14 years old. She probably helped to care for her seven younger siblings.

On February 10, 1881 Annie Christine became the third wife of Orson Hyde Eggleston. She was 17 years old and he was 41. Orson had moved from Ogden to Eden and served in the Bishopric there with Christine’s father, Peter Johnson.

Christine gave birth to her first child, David Orson, on June 15, 1883 in Eden. He passed away November 3, 1884 at the age of 18 months. A second son was born July 5, 1885 and was named Joseph Smith Eggleston. In November of that year, Orson left Christine with her new baby and traveled to Star Valley, Wyoming. She and baby Joe joined him there the next summer.

Family Bible entries of the children of Orson and Christine, beginning with David Orson on the right

Christine was a plural wife. Orson had first married Constance Ann Stephens and then married Mariett Orinda Farley. He eventually moved them all to Afton, Wyoming. Orson built three separate houses for his wives in Afton. A biography of Vedia Eggleston, a daughter of Orson and Mariett, gives some insight into the polygamous lifestyle. Veda had told her daughter Fern that her father “would alternate staying a week with each family until polygamy was outlawed, then he stayed with his youngest wife until she no longer wanted the relationship.”

I have some questions about the accuracy of that statement. Actually polygamy was against the law the whole time they lived in Afton. Orson’s first wife Constance Stephens divorced him. She married Ether McBride in 1904. Vedia was born in 1897, so she would have only had memories of 2 wives during her young childhood. After Christine’s death her mother Mariett was Orson’s only wife. 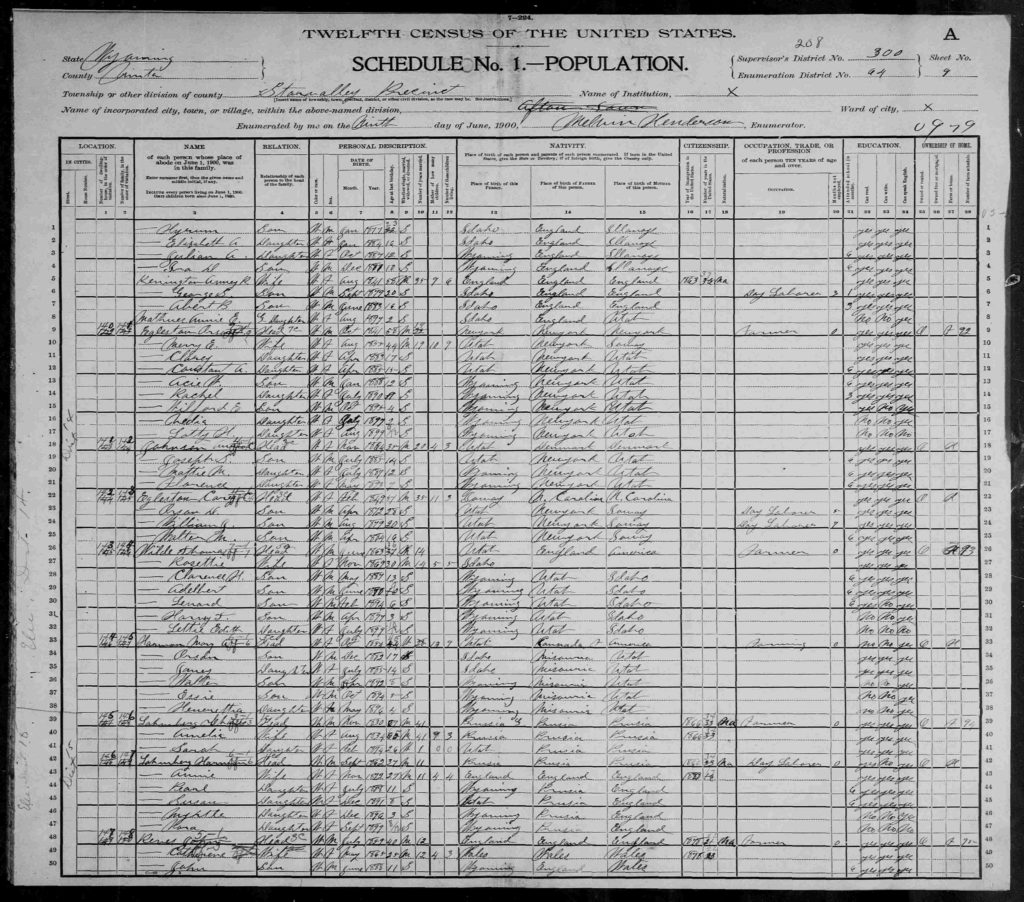 Sadly, most of what I know about Christine’s life is comes from what was written after her death. She died way too young, on August 13, 1909 at age 44. This must have been a shock for the family. Joseph was living in Jackson Hole at the time. Mattie Mae had married Harold Stock in 1905 and they were living in Afton. Florence would have been sixteen. Theron was just four years old when his mother died. 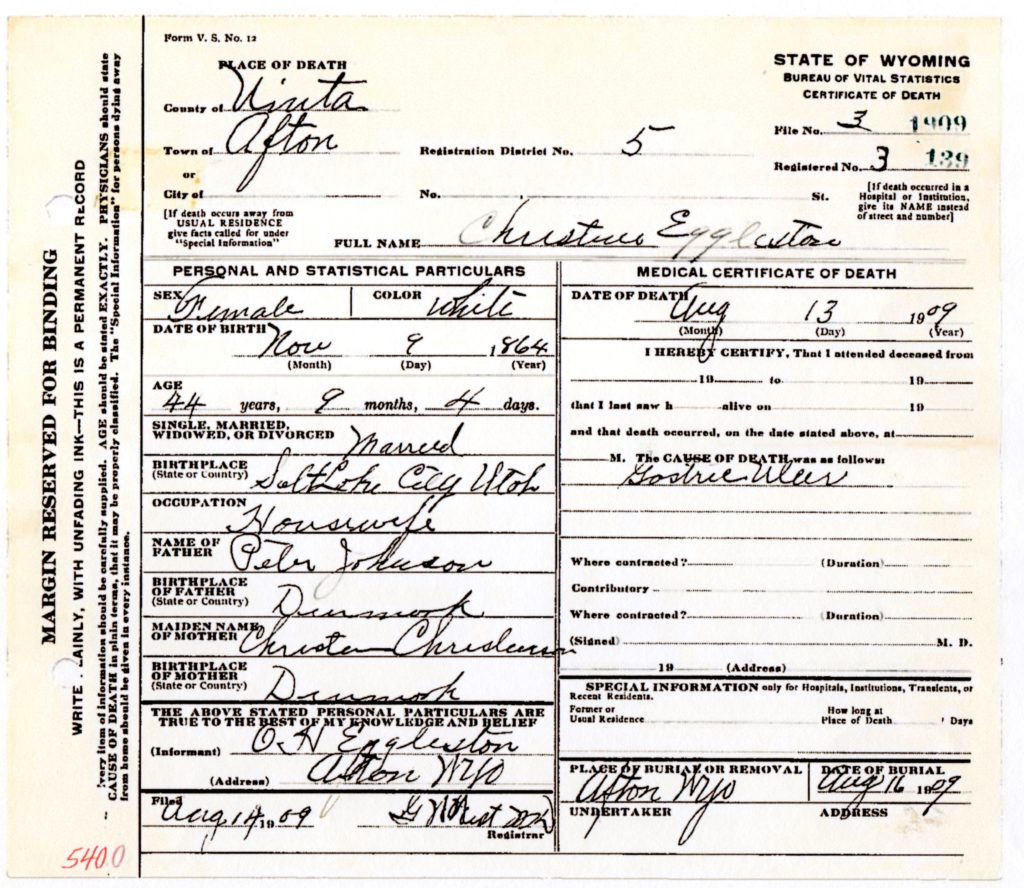 Christine’s obituary and funeral report were published in the Star Valley Independent, August 20, 1909. Orson probably was working for the paper at that time and may have actually written or typeset this article. This document gives us the best information about Christine’s character and her life.

Just as we started printing last Friday word came that Mrs. Christine Eggleston had passed away. She had been quite sick for nine weeks and during the last three weeks she had at times shown signs of being very near death’s door. The ward has lost a faithful worker, and the Relief Society a faithful secretary.

Sister Eggleston, was born in Salt Lake City, Nov. 7th, 1864 and the next year her parents moved to Eden in the Ogden Valley where she remained until she came to Star Valley in the Fall of 1886. In the meantime she was married to Orson H. Eggleston in February of the year 1881.

She was the first Secretary of the Relief Society in Afton, and has held that office since that time until her death, with the exception of two short intervals. In addition she had held the office of Treasure at times.

She is the mother of five children, the first one died when about 18 months old and the others are here, the youngest being a boy four years old.

She has lived a worthy life and died as she had lived a faithful Latter-day Saint, and in her death is deeply mourned.

The funeral was held at the Afton Meeting house at 2 p.m. Monday and a large crowd assembled to pay their last respects to the departed. Appropriate hymn: “Sister thou wast mild and lovely” and “Shall we meet” were sung and then Patriarch C. D. Cazier spoke for some time in words of love and kindness, and read a very appropriate verse from the hymn book.

Sister Mary Gardner, one of the Stake officers of the Relief Society, spoke at length on the character of Sister Eggleston and praised her for her good works, bearing testimony to her mild temper, her faithful performance of duties, and her punctuality.

Mark Hurd and Mary Yeaman sang together, “It is well with my soul.”

Elder N.J. Christopherson, Pres. Burton and Pres. Geo. Osmond each, spoke for a few minutes of the high character of the departed, and uttered words of love and sympathy to the mourners and exhorted those present to live that they might be worthy of the Celestial glory.

Bishop Osborne Low told how Joseph Eggleston, son of the deceased, had heard of the sickness of his mother on Thursday, while in Jackson’s Hole, and as the people there were very busy with their crops, he was unable to procure a horse with which to make the journey, and so in answer to the call to come to his then dying mother, he had walked 75 miles to the lower end of the Star Valley where he had been furnished with a horse, and had ridden into town, arriving only just a few moments before the funeral procession left the house.

In speaking of Sister Eggleston he told of the careful way in which she had paid her tithing, regarding it as a sacred duty and carefully computing the amount she would add a little more for fear that she had forgotten something.

The service was closed by singing the hymn, “Now we lay thee down to sleep:” 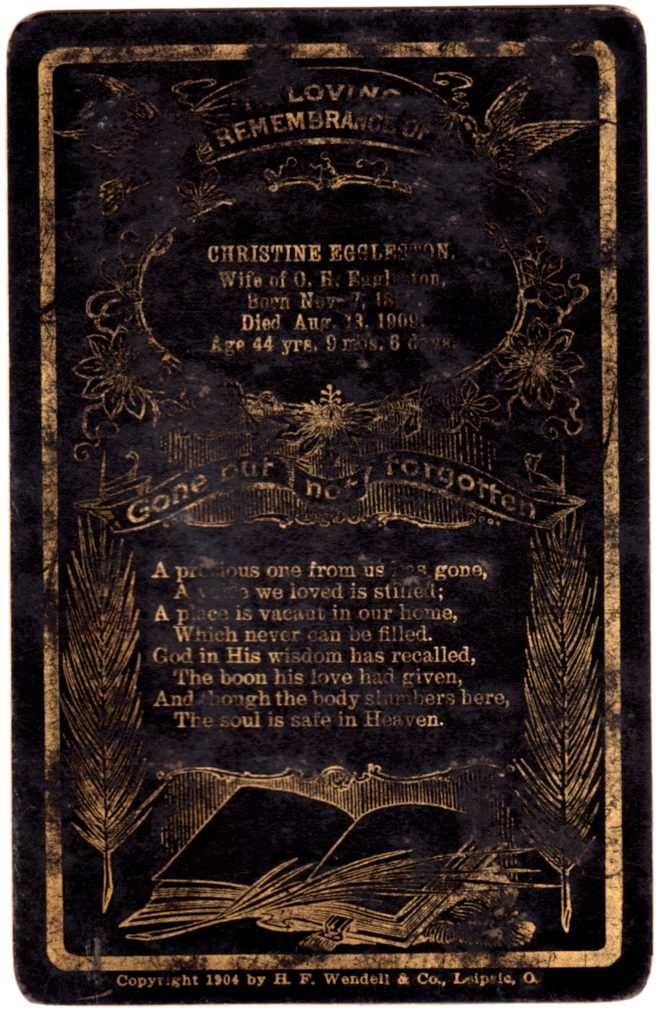 Christine was buried in the Afton Cemetery, where Orson was later buried next to her. 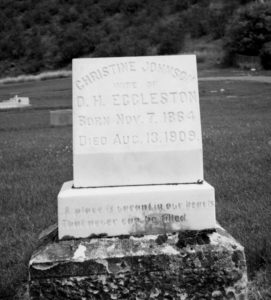